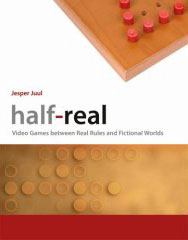 Film became accepted as an object of academic study in the 1960s, approximately 70 years after the first public screenings. In contrast, video games are being studied in universities only a few decades after the 1970 release of Computer Space, the first commercial game. The rapid assimilation of video games into academia is a response to their increasingly dominant presence in Western popular culture; such games now command more of the American leisure dollar than motion pictures do. Jesper Juul’s Half-Real, the latest in a flurry of video game theory titles, is an ambitious attempt to validate and define this field.

Unlike students of science, students of culture often feel obliged to justify their object of study, and Juul is no exception. He admits that video games are perceived as a “lowbrow category of geek and adolescent male culture” (20); consequently, they received little academic attention during their formative years. Until recently, the literature consisted mainly of the self-publications of enthusiasts, design tutorials, professional journalistic histories of the industry, and a few anthologies of academic essays. Existing full-length academic works typically have a narratological (Janet Murray’s Hamlet on the Holodeck) or sociological (Sherry Turkle’s The Second Self) slant. Juul eschews these approaches in favor of a strict focus on the study of games, which he views as a combination of “real rules and fictional worlds.”

As in any discipline, video game theorists struggle over appropriate definitions of their field. Juul’s book sidesteps the methodological rift between ludology, the study of games, and narratology, the study of how games tell stories. The latter approach derives from literary studies and treats games as objects of interpretation; the former believes games deserve new interpretive and aesthetic standards. Juul reconciles these approaches by proposing a “classic game model” consisting of characteristics that all games share:

A game is a rule based system with a variable and quantifiable outcome, where different outcomes are assigned different values, the player exerts effort in order to influence the outcome, the player feels emotionally attached to the outcome, and the consequences of the activity are negotiable.

Juul’s model is a formal theory of games which describes the relationship between the rules of the game, the player, and the outside world. This broad definition encompasses games ranging from the ancient Egyptian game of senet, a precursor of modern backgammon, to the latest open-ended games such as Rockstar’s notorious Grand Theft Auto III. For Juul, games are medium-independent: a game of chess can take place on a board, on a computer screen, or entirely in the mind. However, some media are more suited to some sorts of games than others.

Though Juul’s main argument is that games are “rules and fiction,” Half-Real’s most productive insights concern rules alone. Rather than refuting the perception that video games are immature, Juul notes that the lack of complex characterization in most games is partly “because emotions are hard to implement in rules.” Juul also distinguishes emergence games such as chess, in which a small rule set generates endless possibilities, from the historically newer category of progression games such as 1993’s Myst, in which consecutive predefined challenges must be overcome.

Juul’s key insights on fiction are that progression games typically rely upon fictional worlds to maintain interest, and that these worlds function as both rules and narrative by manipulating space. When a bridge in Grand Theft Auto III is being repaired, the bridge closing is a narrative event, but also enacts a rule by restricting access to an area of the game which is reserved for later play. Juul is clearly more comfortable discussing rules than fiction, though, and the discussion of how fiction works in games is less than satisfactory. For instance, he severely underestimates the player’s imagination when he states that “the goal in the fictional world [must be] emotionally positive… it is hard to imagine an Anna Karenina game.” In fact, depressing conclusions are common in horror games. It would be more provocative to say that since narratives are sequences of conflicts, all narratives can be imagined as progression games; this would contribute to an understanding of military simulations, which have lent a surreal game-like aspect to real war.

Juul freely admits that his “bare-bones description of the field of games” is limited and meant as an invitation to further discussion. For that to happen, game studies will have to place video games in context and move beyond formal systems, which tend to favor continuity over discontinuity. If progression games are “historically newer” as Juul claims, what caused their emergence? If fiction is “not universal to games,” why did the incorporation of fiction increase their appeal? By paying attention to social and historical detail, historians of early cinema discovered that there was nothing inevitable about the later predominance of narrative film. Game studies should be differentiated from literature and film studies, but it ignores the lessons of those fields at its peril.