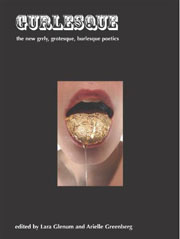 Anthologies tend to be read as turning points in literary history—forward-looking declarations of something just beginning or backwards-looking canonizations of something just completed. Lara Glenum and Arielle Greenberg, the editors of Gurlesque: The New Grrly, Grotesque, Burlesque Poetics, seem to anticipate that Janus-faced quality of the literary anthology, and their twin introductions engage with it in self-conscious and often ambivalent ways. On the one hand, both work to present this anthology not as a closing gesture of codification but as a radical break. There’s the word new in the title; there’s Glenum’s insistence that the anthology is put forward “not . . . as a monument” but as “a portal, as the beginning of a conversation”; and there’s the characteristically hyperbolic rhetoric of the avant-garde that buzzes through Greenberg’s introduction, which promises that the Gurlesque is “just the apocalypse . . . just the second coming of a baby girl messiah.” On the other hand, there’s also an unusual quantity of historicization surrounding these revolutionary gestures, as if Glenum and Greenberg are self-consciously acknowledging their by-now familiar character. Both editors devote the majority of their essays to establishing a historical pedigree for the Gurlesque that stretches back through ’90s riot grrls, to 20th-century poets like Alice Notley, Sylvia Plath, and Gertrude Stein, to 19th-century burlesque theater, and finally to proposed ur-Gurlesque figures like Emily Dickinson or Shakespeare’s Ophelia.

A sympathetic reading might see this as a feminist reversal of Marinetti’s call to demolish the museums, a turn towards a matrilineal, diachronic community of artists against the phallocentric struggle to conquer the father; a less generous reading might see a somewhat academic investment in canon formation and legitimization. But neither of those readings would fully account for the way that Greenberg in particular extends the historicizing impulse into a kind of personal and cultural nostalgia, a nostalgia that seems at once of the avant-garde and for the avant-garde. When Greenberg first elaborated her sense of a Gurlesque aesthetic in 2002, she located the origins of the tendency in a ’70s feminist girlhood. Here (perhaps in part to accommodate the addition of younger poets) she emphasizes instead a ’90s riot grrl youth. But the nostalgia in her introduction reaches toward something much larger than riot grrl itself or any personal experience of it; it’s a nostalgia for an entire epistemology of the counterculture that may seem endangered by 21st-century technology. In Greenberg’s description, a Gurlesque life story is most recognizable by the stylized objects it leaves behind—mix tapes and zines, lipstick and fishnets, all the physical memorabilia that threaten to disappear in a culture linked through digital rather than personal interactions. In reaching back to an earlier iteration of the avant-garde, Greenberg appears to reach back to a past vision of the future—one defined by the handmade and the in-person rather than the global, virtual network.

The poetry picks up this orientation towards the material as a shifting marker of identity, but also complicates it. At times it is the poetry of post-feminist fashion statements and burlesque costume changes that the editors’ introductions might lead you to expect. In Nada Gordon’s “Porpo-Thang,” for example, the regalia of socialized femininity takes on a life of its own, producing something like a Flarf rewrite of Stevens’s “Anecdote of the Jar” starring a troupe of performing dolphins and their colorful lingerie:

The porpoises fling up their
orange underthings; swaying
in the wind, their heavy rotation
is brief and horrifying,

full of bright scrawls, of thin
and lacy garters.

But more of the poems—many more, in fact, than the introductions might suggest—veer instead towards what Glenum calls the “female grotesque,” poetry rooted less in the paraphernalia of identity than in the brute fact of the body. In much of Ariana Reines’s contribution, for example, it’s difficult to imagine the characters wearing clothing at all; they seem to exist naked and covered in some vague afterbirth, perpetual Adams and Eves who have reached sexual maturity without overcoming the violent confusion of being born:

Because of remembering where or what you are the ovum gasp and burst. First he spit on my asshole and then start in with a middle finger and then the cock slid in no sound come out, only a maw gaping, grind hard into ground. Voluminous bounty of minutes sensate and glowing shoot out.

Most of the anthology lies somewhere in between, like Chelsea Minnis’s mash of hot pants and sexualized violence, or Stacy Doris’s rewriting of De Sade by way of cartoonishly decadent coiffeurs. A few of the most potentially anthemic poems—like Brenda Shaughnessy’s “Your One Good Dress” or Dorothea Lasky’s “Boobs Are Real”—seem to merge the two perfectly, turning body parts and apparel equally into prostheses that support a defiant yet strangely ironic kind of feminist self-assertion. If there is a single stance that most characterizes the collection, it would be just this candid mixture of stridency and ambivalence—a kind of hanging up between the sometimes conflicting demands of individual expression and political liberation most directly expressed in Tina Brown Celona’s “Sunday Morning Cunt Poem”: “Some said it was a vicious swipe at feminism. Others said it was a vicious feminist swipe. It was the only word I knew.”

What also unifies the anthology is the way in which—whether from an excess of identifiable tokens (Gordon) or from their absence (Reines)—all of this turning toward the material produces not a grounding of identity but its dissolution. As Glenum puts it, “Gurlesque poets . . . assume there is no such thing as coherent identity. There is . . . only the performance of self.” This proposition is powerfully, consistently, and convincingly enacted by nearly all of the poetry here, and strikingly, it seems to be treated by most of the poets as a given more than a discovery. No wonder, then, that Greenberg might be nostalgic for an era when those provisionally assumed, purely performed identities left behind some material souvenir that could provide an illusion of continuity for a self looking back through the long lens of the anthologist. As an avowedly Gen X collection, Gurlesque is a statement not only about feminism or the avant-garde, but about the rewriting of those concepts in response to a particular historical moment, a moment in which 20th-century visions of the future may seem more past every day. Only time will tell if that response represents something closing, something just beginning, or—most likely—some of both.