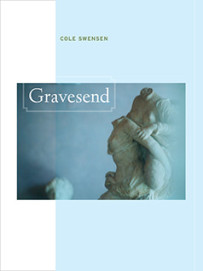 Poetry may be, as Wordsworth opined, “emotion recollected in tranquility,” but a sub-genre of contemporary poetry could be described as “projects executed with efficiency.” Cole Swensen, a major practitioner in this sub-genre, dedicates herself to a certain topic of interest—the creation of the Crystal Palace, for instance, by royal consort Prince Albert—exhaustively examines the massive construction’s cast-iron and glass protuberances, the striated populations who visited, the words “crystal” and “palace,” and the views, whether pastoral vistas or Victorian philosophical perspectives. So academic is her approach, she might easily include a syllabus!

In this, she is not alone; Mary Sybist’s Incarnadine, which examines various guises of the Virgin Mary, exudes the whiff of “undertaking,” as do such poetic projects as Tyehimba Jess’s treatment of the life of Leadbelly, or Chris Llewellyn’s eulogy for victims of the Triangle Shirtwaist fire. Such works are at their best, gloriously fervent, as in the case of Alice Notley’s reimagining of Homer’s Odyssey, The Descent of Alette, or Louise Glück’s botanical opera, The Wild Iris. At their worst, they are self-consciously didactic, the equivalent, say, of Gordon Matta-Clark sawing an entire house in half. First, you think: cool. Then: how long is this going to take?

At first glance, Swensen’s latest collection, Gravesend, exhibits the requisite elements of this sub-genre. It is sectioned off by poeticized interviews with people-on-the-street about their beliefs in, or contact with, ghosts. It all seems rather airless and predictable—grave’s end, indeed! The surprise is that Gravesend is humanized by Swensen’s very real interest in the belief in ghosts and anchored by her interest in belief itself. Yes, there are the requisite ghost stories (by Defoe, Wilkie Collins, Le Fanu, Henry James, et al), and yes, she quotes Dylan Thomas’s “Refusal to Mourn the Death of a Child in London,” but the poems treating these topics have such verve, such curiosity and focus, that they read as “inspired” rather than “required.” The opening pages include a dedication to three Swensens, presumably the poet’s near relatives, and personal interest, even longing and grief, lingers in her voice and the voices of the interviewees.

The question what is a ghost? brings a litany of response. Ghosts are: “tangled electricity,” a “radiogram of the air,” a “broken window”; “a knot in the otherwise smooth flow of time.” Ghosts are examined so exhaustively (titles of poems include “Etymology,” “Varieties of Ghost,” According to Scripture,” and perhaps best of all, “Ghosts in the Sun”) that they redefine their subject, as if “ghost” was a prism for multiple perspectives, distorting and clarifying at once. Or as Swensen writes, ghosts are:

more widely a tendency
to recur, which is a kind of clock      that stopped      the endless circling

In “Crowds,” a ghost passes through a woman. She senses his fingers “inside my chest” and, having intersected with the non-living, shifts from third to first person (i.e., the she of the poem becomes the I), asking:

will you ever be
a sound in an empty house       an inexplicable mark that, washed off, grows dark
(“Crowds”)

This gives some sense of Swensen’s prosody. In justified paragraphs, the tabbed spaces between phrases resemble caesuras (a kind of visual representation, perhaps, of the boundaries between life and death, the gap into which she posits her poems). Punctuated throughout, Swensen neglects to place periods at the end of the final lines (rejecting, as ghosts do, end-stopped finality).

This structure serves her well, reminding the reader of C.K. Williams’ move from short to long lines in With Ignorance (to accommodate, he has said, the stretch of his long limbs); Swensen’s “paragraphs” could have been organized into lineated phrases but the caesuras give room in interstices for lost connections, changes of tense, and recursive narrative threads. For example, in “A Good Friend,” she eerily contextualizes Wharton’s famous phrase:

and she ends with that woman, a ghost to herself, haunting her own life:

These lines, excised from the beginning and the end of the poem, enact the split between soul and body with lyrical efficiency, as if Swensen were playing multiple melodies at once with minimal effort and lyrical efficiency, a Thelonious Monk striking structure, mouth-music, biography, and insight at one and the same time.

Flaubert wrote that “art has often given me a kind of revenge over life,” and if we, as we near the final pages of this fine collection, begin to see ghosts as a dream of an unchangeable self, equivalent to raw ideas and free from dissolution and decay, we recognize the method in Swensen’s obsessive focus. (Indeed, the weakest part of the book is the inclusion of Gravesend, the town on the River Thames, as a starting point for questions—one resents the sudden swerve toward off-the-cuff explanations of the etymology of its name and away from our study of haints and hauntings.)

The total effect may remind readers of Calvino’s Invisible Cities, a tour de force of imaginative response that entertains even as it touches something of the longing to escape or transcend what Schiller called the “mere world” of ourselves. As Swensen writes (or transcribes) in one of her “Interviews,” ghosts are

. . . all around us; I mean, so all
around us they’re simply the background. We don’t see air either, or wind. We live in
them.

And as she proves here, they live in us. Which makes us houses, too.