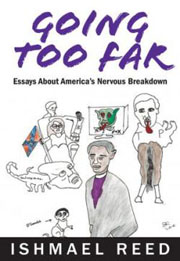 For six decades, Ishmael Reed—a writer of novels, plays, poems, and essays—has been offering critiques of American culture. As editor of Konch, the online literary journal, Reed has sought “to publish those voices that are ignored by the American media,” as he writes in a recent issue, declaring Konch in contrast to “the American media, progressive, mainstream, corporate and alternative literary magazines, book reviews, etc. [who] continue to publish writers and poets from the same background and values.” (“Konch at 16”, published in the spring / summer 2012 issue) Any analysis of Reed’s writing style makes it clear that his values have priority, at times even over content. Consider an early and characteristic passage from this new collection:

Both CNN and MSNBC have formed an alliance with the Tea Party, which includes leaders who’ve called for the president’s assassination. Even Melissa Harris-Perry, a black woman, described by MSNBC as a progressive, said that “There are a lot of things I like about the Tea Party.” What lot of things? A prominent Tea Party member referred to the president as “a skunk,” a reference to the president’s bi-racial heritage. Does she like the Tea Partiers showing up at rallies with guns, or signs showing the president in a coffin? Calling for his assassination? Jules Manson, a darling of the Tea Party, made a Facebook post that said the following: “Assassinate the fucken [sic] nigger and his monkey children.”

We see here some of Reed’s righteous motivations for political critique, but we also see several aspects of his approach: screed pushing without citation or detail (What leaders? Who is Manson? Was there any notice of this post, any response?) while specific individuals are subject to attack based on decontextualized fragments. Reed gives us insufficient information;Going Too Far does not begin to go far enough to stand as informed, reliable critique of the cultural catastrophe it purports to address.

The book is divided into three parts. The first, on the Tea Party and racism in America, compares the Tea Party’s rise to that of the National Socialists in Germany— “and for those who might protest that such an analogy is off limits, I would remind progressives that prominent neo-Nazis and Holocaust deniers play an important role in the Tea Party,” he writes, without naming any names. In the second part, he attacks the film Precious, which he claims “advocates the sterilization of poor black women”; the author of the novel on which it was based, Sapphire; and “one of the more odious products about black life,” “David Simon’s neo-Nazi The Wire.” The third part is an assemblage of interviews.

Precious “is to blacks what Mel Gibson’s The Passion of Christ was to Jews,” says Reed, who adds that he “wasn’t surprised that NPR’s Terry Gross would become part of the film’s promotion. I stopped listening to her years ago because she seemed to have a thing about casting all black men as sexual predators.” Again, we are given no examples of this “casting.” Likewise, we are told that Reed no longer reads The New York Times Magazine because it devotes attention to “flesh-eating black cannibals, lazy and shiftless welfare mothers,” and that its “coverage of Africa could be written by Edgar Rice Burroughs,” but specific examples are not provided. While Reed does draw on the New York Times for several examples throughout his text, and while several of the pieces collected here were published as Op-Eds in its pages, he insists that, as part of a larger “Jim Crow media,” it is implicit in publicizing “this hate crime as entertainment, this neo-Nazi porn and filth” which is Precious. His main argument against the film is that “blacks were shown as incestors and pedophiles,” and that the screenplay “follows the Nazi model” of idealizing whites, though he is also troubled that this is “a film in which gays are superior to black male heterosexuals,” as well as by the fact that “in this movie Caribbean Americans are smarter than black Americans.”

Reed’s argument against The Wire is that the show “locates drug activities almost exclusively among the black population, which makes it propaganda, because, as writer Michelle Alexander told Sasha Lilley on the program Against the Grain, broadcast on KPFA radio, most drug users and sellers are white.” While The Wire seems content to “dump all of the country’s pathologies upon the inner cities,” his own play “Hubba City offers a more complicated view of the War on Drugs.” He is quick to state that he is not “opposed to white men writing about the ghetto. Over the years I’ve published scores of white men and women,” yet this reflexive turn to his own accomplishments—the plays he’s written, the people he’s published—is basic to some aspects of his critique. Consider his attack on Sapphire, author of the novel Push, on which Preciouswas based: Reed asks us to consider that since he has published “the works of over thirty black women writers from the U.S. and Africa over the last five years, why can’t Sapphire do the same and shouldn’t she avoid verbs like ‘rampaging’ in light of her poem ‘Wild Thing’ which helped create the hysteria that resulted in five black and Hispanic kids being sent to prison for a crime they didn’t commit?” No attention is given to the conflation of the task of the novelist with that of the publisher, or whether in Reed’s view all novelists have a responsibility to run websites publishing other writers. The story of how a word in a poem managed to send innocent children to prison is also not explained.

There are three main problems with Reed’s approach: scale, selectivity, and shallowness. By scale I mean, for instance, the overuse of Nazi metaphors (though Reed might object to the term “metaphor”), or when Reed states that “the American media, up to its old tricks by raising lynch mobs against misunderstood groups,” is like “The kind of people who call Picasso’s work ‘Cubist’ as a way of denying its African influences.” Does “lynch mobs” here mean “lynch mobs”? I think for Reed it does, but there is, if nothing else, a burden on him to explain his usage of such terms. By selectivity, I mean how Reed, in service of a narrow point, assembles fragments of information without explanation or context: only rarely does he track things down. In an interview with novelist Nuruddin Farah, remarkable for Reed’s seeming lack of any background material for the questions he’s asking about what he calls “the so-called ‘pirates’” in the Gulf of Aden, Farah tells him “If you Google ‘dumping nuclear waste in Somalia’ you will find lots of articles,” but Reed doesn’t pursue this issue. Finally, shallowness permeates Reed’s approach. He has, for instance, a valid argument about racism in the media and media control by corporations, but he’ll advance this only by making snide remarks about Arianna Huffington, then degrade his own case by, for instance, referring to Paul Krugman as being “treated as the leading economist of the white power shadow government,” or, in lieu of a reasoned critique of Senator Mitch McConnell’s votes, policies, or statements, Reed will simply say “He’s from Kentucky and though Kentucky was not part of the Confederacy, a Confederate ‘shadow government’ was a powerful influence on the state government during the rebellion launched by traitors.” Most of the personal attacks here are reserved not for politicians but for academics and artists, other writers, creating a tone that coexists uncomfortably with Reed’s own self-aggrandizement: “When Tupac mentioned me in a song, it compensated for all of the hostile responses to my nonfiction and fiction.”

Another revealing moment occurs in an interview with Reed, when he’s asked if he has “Any advice on how to become more critical in news consumption?” Reed answers: “I have an online magazine. I get useful information each day from those who write on Facebook,Counterpunch.com, Media Matters, FAIR. And Richard Prince’s ‘Journalisms’ are essential.” The first impulse is to cite his own accomplishments. The second, to speak not of a widening circle but a linked network of those who share perspectives and “likes” and who, likely, are willing to applaud his vitriol, regardless of the lack of depth. Again, here is a case of a writer not going nearly far enough, not even bothering to speak past his particular in-crowd. The result is neither criticism nor informed political discourse. There is value in the raw anger of these pages, but only if they goad others into doing actual research and constructing reasoned, informed arguments. As for the petty attacks on other artists for not being publishers or for being gay: that is just poison.