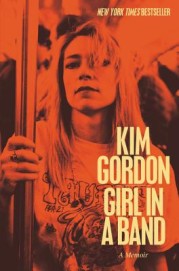 Penned by one of rock’s most sophisticated and innovative personalities, Girl in a Band is a dense, compact account of nearly three decades of cultural history. Kim Gordon’s memoir picks up where Patti Smith’s Just Kids ends, with the next generation of artists who were inspired by the addictive energy of New York City.

Gordon is an icon for fans of both music and fashion, as well as a visual artist and a mother. Her band Sonic Youth represented integrity, avant-garde fearlessness, and unironic cool. Many also admired her marriage to the group’s co-founder, Thurston Moore, and their equal footing in the group’s creative process. While Gordon claims that she does not always see herself as a musician, she remains a consummate performer with “a good ear” who “[loves] the visceral movement and thrill of being onstage.”

Gordon and her family lived in Los Angeles in the late 1960s, a city she describes as having “a Freudian death instinct” that led to the shocking murders committed by the Manson Family. Although raised on the West Coast, she came to represent the quintessential New Yorker, and music fans hoping to hear about the legendary New York hangouts CBGB’s and The Mudd Club or the ’90s grunge explosion will not be disappointed. There are plenty of behind-the-scenes stories about Kurt Cobain, Neil Young, Johnny Thunders, Billy Corgan, Kathleen Hanna, and others.

Girl in a Band is refreshingly candid, yet never vindictive or mean-spirited. Gordon does not sugarcoat the everyday mundanity of making a living as a rock star. She admits that there was a randomness to her band’s early work, and that they did not know exactly what they were doing. On the other hand, she lets us in on how it felt to be the only woman in the band:

Over the years I can honestly say I almost never think of “girliness” unless I’m wearing high heels, and then I’m more likely to feel like a transvestite. When I’m at my most focused onstage, I feel a sense of space with edges around it, a glow of self-confident, joyful sexiness. It feels bodiless, too, all weightless grace with no effort required. The need to be a woman out in front never entered my mind at all until we signed with Geffen.

We also learn about the art world in New York in the 1980s, when Cindy Sherman, Jean-Michel Basquiat, Richard Prince, Barbara Kruger, and Jeff Koons made a name for themselves. One of Gordon’s early day jobs was as a receptionist for Annina Nosei and Larry Gagosian. The latter is described as a creep who falsely claimed that he and Gordon had dated; she found it difficult to “take Larry seriously” as an art dealer, and was very surprised by his eventual success.

The memoir begins with the pain and sadness surrounding Sonic Youth’s last show. Gordon had recently learned that Moore had been unfaithful, and things were tense:

The couple everyone believed was golden and normal and eternally intact, who gave younger musicians hope they could outlast a crazy rock-and-roll world, was now just another cliché of middle-aged relationship failure—a male midlife crisis, another woman, a double life. . . .
It was as if he’d wound back time, erased our nearly thirty years together. “Our life” had turned back into “my life” for him. He was an adolescent lost in fantasy again, and the rock star showboating he was doing onstage got under my skin.

Despite their three decades of personal and professional partnership, however, Moore is often relegated to the periphery of this account, as if the betrayal were so fresh that Gordon couldn’t bear to say much more. We learn about how they met and how well they worked together as parents and bandmates, agreeing on nearly every aspect of Sonic Youth’s sound and image. Gordon admits that she “believed [Moore] was my soulmate.” Moore is absent from many of the stories because “knowing what I know now, it’s hard to write about a love story with a broken heart.” Everything that Gordon had taken for granted about her marriage was suddenly suspect. Elsewhere, she writes: “I wonder whether one can truly love, or be loved back, by someone who hides who they are. It made me question my life and all my other relationships.”

After her marriage ended, Kim Gordon formed a new band called Body/Head and focused on her visual art again. Girl in a Band is a tough, witty memoir that ought to lead more young women to pick up the guitar.