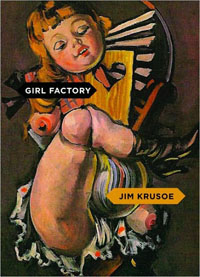 Girl Factory opens with vintage Jim Krusoe hi-jinks. Jonathan, the book’s narrator, visits an animal shelter intending to liberate a dog named Buck, who, after years of secret government testing, has developed human-like intelligence. But through a case of canine mistaken identity, the well-meaning Jonathan accidentally uncages a rabid-man eater named Megamon who immediately kills a Cub Scout and an old woman shopping for pets, and then heads out the door on the hunt for more victims. It’s the perfect opening for a novel that, from beginning to end, runs rambunctiously wild inside Jim Krusoe’s fictional world—a world dictated by pure chance, where oddness is the norm, and where the strip-mall blandness of American suburban life is rendered hilariously surreal and violent.

After Megamon’s release fades from the newspaper headlines and Jonathan can once again show his face on the streets of St. Nils (which, book by book, is becoming Krusoe’s own Yoknapatawpha County), Girl Factory settles down into its central action. One night, as he’s finishing his shift at Mister Twisty’s yogurt shop, Jonathan goes down to the basement and discovers a makeshift laboratory where six women, completely naked and unconscious, are preserved in giant, glowing cylinders full of a mysterious yogurt solution. As if that weren’t shocking enough, one of the girls happens to be the spitting image of Jonathan’s first love, Mary Katherine.

This strange discovery launches Jonathan on a journey that eventually comes to include murder, a creepy support group for widows and widowers, a former sea captain who spins yarns while chronically watering his lawn, a gun-toting health inspector, a zoo that’s been converted to an upper-crust hangout where the patrons get their kicks by heckling panthers, and oodles and oodles of exotically flavored yogurt. Jonathan charges himself with the task of reviving the preserved women, and as he conducts his DIY experiments, he fills us in on the events of his life that have brought him to this point—including his relationship with Mary Katherine and, in one of the novel’s funniest scenes, his father’s death at a Mexican poncho shop.

What sutures all of these disparate tidbits together is the unbelievably attuned narrative voice of Jonathan. Like the narrators of Krusoe’s Blood Lake and Iceland, Jonathan can editorialize, rationalize, and soliloquize about anything. He talks around things a lot, and he presents his off-kilter world to us with skewed similes (many reminiscent of Richard Brautigan at his best), a manic eye for detail, a propulsive syntax, and a cool but completely offbeat logic that would befit any Kafka anti-hero. Here’s Jonathan, for instance, recounting a memory sparked by one of his nightly examinations of the woman who might be Mary Katherine:

Her shins were as streamlined and smooth as the legs on a Danish Modern coffee table my parents once had. Her knees, friendly and yet fragile, were a symphony of flat and rounded planes, dimples and sinew. How often I had held Mary Katherine’s right knee in my left hand while she drove the two of us to the donut shop just a few miles down the road from my dorm, moving my hand only to change the station on the radio of her old Dodge from rock ‘n’ roll to easy listening and then back again; my other arm resting out the open window, as all the while I looked toward the horizon for my first glimpse of the giant donut sculpture strapped to the shop’s roof that would signal our destination, and which, come to think of it, seemed a premonition of the life that awaited us, although in different ways, at Mister Twisty’s.

Girl Factory is packed with writing like this, and repeatedly, just as Jonathan’s tangents seem to be spinning out of control and the writing starts reaching a little too far, Krusoe reels it all back in with the elegance, surprise, and seeming effortlessness of a natural-born humorist.

Perhaps the greatest thing about Girl Factory (and Krusoe’s fiction in general) is that while it’s wacky and outlandish and extremely funny, it also possesses an authentic pathos. Hidden beneath Jonathan’s labyrinthine language and digressive insights is a deeply lonely human being, and Krusoe manages to tinge all of his joking with sharp pangs of authentic heartbreak. When we witness a melancholy Jonathan sighing longingly at a girl who might be his ex-girlfriend in a Plexiglass canister full of yogurt, the scene’s not just funny—it’s also, in a strange way, incredibly moving.

In Girl Factory, Jim Krusoe has served up a shaggy dog tale of the highest quality. It’s impressive that a novel with so much to offer is as tightly constructed as it is, and it’s refreshing to come across prose this free-wheeling and fun. And though you can easily spot Krusoe’s precursors—Sterne, Kafka, Barthelme, Lynch—presiding over this book as its surrealistic and humorous godfathers, Girl Factory still manages to remain a work that’s wholly Krusoe’s own: hilarious, oddly touching, and dizzily readable.