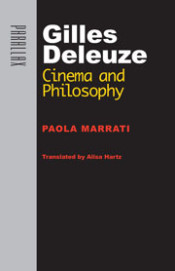 Beautifully written and expertly translated, Paola Marrati’s Gilles Deleuze: Cinema and Philosophy brings much needed clarity to Deleuze’s two monumental works on cinema. Two questions have tended to haunt readings of Deleuze’s books. The first is: Why structure an entire theory of the cinema around the philosophy of Henri Bergson? After gracefully filling the gaps in Deleuze’s own discussion of Bergson, Marrati suggests that if there is a fundamental affinity between Bergson and cinema, it is because “Bergson in effect proposes a conception of the material universe as a universe of figures of light and movement,” and what is cinema if not an assemblage of images in movement (“or movement-images”)? In the same way that philosophy once gave physics its metaphysics, Bergson gives cinema its “metacinema.” Marrati takes this even further: it isn’t just that both cinema and Bergson build their universe out of the same constituent units (movement-images); both assemble these images in the same way. Both structure their evolution around “pragmatic perception”—perception oriented toward action. Bergsonian perception extends luminous matter into affections and actions while cinema differentiates its movement-images into perception-, affection-, and action-images.

I find this initial answer admirable in its fidelity to Deleuze’s text, but unconvincing; a more compelling reason for the turn to Bergson comes in Marrati’s second chapter. Bergsonism provides Deleuze with the groundwork for an alternative to phenomenology (which was the dominant mode of philosophy in early 20th-century France, and, thanks to André Bazin, one of the most fruitful modes of film criticism). Bergson goes beyond the phenomenology of both Heidegger and Husserl: in the regression from constituted experience back to constituting experience, he doesn’t stop at a Dasein individuated in the premonition of its own death, or at an intentionality which functions naively as an already given bridge between subject and object. Marrati brilliantly explains how Bergsonism surpasses both of these premature stopping points. It discovers a place beyond the individual and prior to intentionality. Bergsonism begins in an impersonal field of images—matter in movement, movement-images—and it works out the way in which the subject and its world are able to surge forth from this field. It at once both radicalizes phenomenology and founds it anew.

What is the cinema’s role in this? Cinema, Marrati explains, has the “power of undoing the ‘turn’ where ‘experience becomes properly human’ in order to return to perception in matter, to come back to the in-itself of the image.” Cinema puts perception back into matter; it takes us beyond the human, beyond the personal, and lets us experience that originary material field of ‘images’ from which consciousness first surged forth. In other words, cinema is an “instrument in service of revelation” at the service of a radicalized phenomenology. The affinity between cinema and philosophy is no longer based on a superficial identity of starting points (images in movement), nor is it tied to the unlikely thesis of a parallel development between cinema and pragmatic perception. Rather, cinema becomes essentially philosophical. Its technologies provide a new view on the world and grant a new power to thought. It isn’t, then, that Bergsonism structures cinema; it’s that cinema lets us understand or experience Bergson for the first time.

It is this perspective that allows Marrati to put forward a remarkable analysis of modernity in the last three chapters of her book, one that is closely related to the second problem raised by Deleuze’s writings on cinema: what is the status of history in Deleuze’s taxonomy? Deleuze relentlessly denied that what he was doing could be classified as a history of the cinema. Marrati, like most recent readers of Deleuze, doesn’t take him at his word.

Pre-war cinema is structured around pragmatic perception. It clarifies Bergson’s descriptions of a sensory-motor subjectivity: perceptions automatically extend themselves into actions. Events and actions explain one another according to a logic of rational agency. We can recognize actions and understand events according to a causality that is in many ways still our own. Thus, classical cinema tends to encourage a belief in human agency. With the war, however, everything changes:

For Griffith, Eisenstein, and many others, the grandeur of [classical cinema] was sustained by faith in human, individual, and collective action. . . The war—a name that stands here for the whole constellation of events that preceded, accompanied, and followed it—tore apart confidence in human action: we no longer believe that an action can have bearing on a global situation or unveil its meaning even in part; we no longer believe in a human becoming of the world.

After the war it is no longer possible to believe that human agency can adequately respond to events or that events can be explained in terms of human agency. We can no longer claim to see a rational connection between events. The sensory-motor link between event and action dissolves, and we simultaneously lose faith in this world and the revolutionary hope for a better world to come.

Modernity’s crisis, according to Marrati, is not that the subject loses its center at the same time that it succumbs to its fascination with simulacra. Nor is the crisis melancholic, as if we were lamenting the loss of God or no longer content to wait for a God to come. The crisis is that we no longer believe in the world. It is a crisis of faith.

Marrati makes a helpful distinction here: the crisis isn’t cognitive. We aren’t in Descartes’ situation, unable to trust the world because there might always be some génie malin hiding behind the fabric of reality. “Our skepticism is ethical,” she writes. We no longer believe in our ability to act. It’s the link between perception of the event and the action that should rationally follow from it that we have lost.

We thus need a reason to believe. We need a “new faith” that will restore the link between perception and action. For Deleuze, the task of providing this new faith, “the task of believing and producing belief in the world,” falls to cinema. Marrati thus sees in Deleuze a new minimal theology or theology in pianissimo: “The greatness of modern cinema lies in its capability to create other links” and to foster “new ways of connecting images.” These are not simply connections between images, however, and it is here that Marrati is at her best. These new links are possibilities of life. Cinema (and criticism with it, we might add) must restore our faith in the world by providing us with “other livable configurations of thought.”