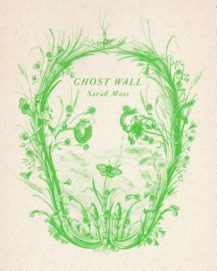 A wall can keep people out, but it can also be used to hide something shameful within. In her spare and enthralling new novel, Sarah Moss probes both sides of this age-old human compulsion to erect barriers.

Set in the north of England in the 1990s, Ghost Wall centers on seventeen-year-old Silvie and her parents, who have teamed up with an archaeology professor and his students to fulfill her father’s fantasy of re-enacting life in the Iron Age, two thousand years earlier. The novel comments on three different historical moments simultaneously: It alludes to the fall of the Berlin Wall (one of the students has recently visited Berlin), but it also looks back to the brutality of an older world—and forward to the brutality of our own.

Silvie, who narrates the story, makes clear that her father’s interest in ancient history reflects his nativist attraction to “the idea that there’s some original Britishness somewhere.” In one scene, the professor and her father debate how necessary Hadrian’s Wall was as a means of keeping native Britons at bay:

The Britons had enough training that the Romans had to build the Wall, Dad said . . . Well, said the Prof, they weren’t exactly British . . . Celts, we tend to call them these days, though they wouldn’t have recognized the idea, they seem to have come from Brittany and Ireland, from the west. Dad didn’t like this interpretation, didn’t want an Irish lineage, or Welsh or French. . . . He wanted his own ancestry, a claim on something.

Many more things are at stake in this conversation than the historical purpose of Hadrian’s Wall, and one of those things is class. Silvie’s father is a bus driver, an amateur historian who resents people like the professor—those who, as Silvie puts it, “were paid to walk the places Dad loved and write the ideas he could have had.” Silvie herself has “never been as far south as Birmingham,” and the trip marks her first extended contact with more privileged young people, those with the resources to travel around Europe for fun.

Whereas her father idealizes a world before industrialization, Silvie understands that Iron Age life demands a great deal of violence. After her mother remarks offhandedly on the possibility of gathering fish for dinner, Silvie reflects on the inaccuracy of this wording: “You don’t . . . gather fish, there has to be murder done.” And she understands that the violent practices they are seeking to recreate have never really left, given that her father is regularly abusive to her and her mother. In one harrowing scene, he beats Silvie with his belt, and she seeks to dissociate from the experience by focusing on “the leather of his belt, the animal from whose skin it was made . . . the sensations that skin had known before the fear and pain of the end.”

One aspect of the ancient Britons’ culture that especially fascinates Silvie’s father is their practices of ritual sacrifice; in order to ward off evil spirits, he explains, they would single out a person—often a young woman—tie her up, and leave her to die in the bog. “You give what you most want to keep,” he has told his daughter over the years. In chilling detail, Silvie describes how her father and the professor join forces to construct a makeshift wall of their own, and how the re-enactment begins increasingly to feel “like something real.” As Ghost Wall moves ominously toward its climax, Moss shows that sometimes even those who do know history are driven to repeat it.