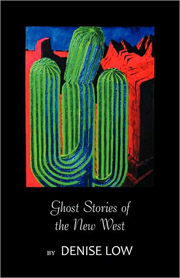 Former Kansas Poet Laureate Denise Low is a poet, editor, publisher, professor, and ghost hunter. Though this last fact may not be widely known outside Kansas—nor is it necessarily the opinion of the author herself—sufficient evidence exists inside the 126 pages of her latest offering,Ghost Stories of the New West. Filled with vivid imagery of the land and the culture, and both verse and prose, the book is an enchanting tribute to the plains and the history long buried there beneath the bluestem that grows wild.

Low, who is of partial Lenape and Tsalagi (Cherokee) descent, freely applies more than just a smattering of Native American knowledge throughout the book. Surgical with the familiar and charming with the ancient, she uses every word to remind us of what has never been truer: it is the land, as much as the people who once inhabited it, that shapes this country. Ghost Stories zooms in on 200 years of time-lapse and brings into focus the Great Plains and its wondrous people.

From the Shawnee prophet Tenskwatawa in “A Mound Builder’s Geography,” to the great Lawrence, Kansas writer in “I Still See The Ghost Of Langston Hughes,” Ghost Stories brims with emotion for the plains and its people. At times it rolls like water from a swollen river after an April thunderstorm, as in “On Thompson River,” when the speaker recalls: “We make love at dawn with / tumbling water / our witness.” Then there are colder, dryer moments that leave you feeling wind-burned, as when “Geronimo’s Boots Leave Town” recalls “The time he slipped off a mountain / when surrounded by the army / The time he shapeshifted / so another man’s face appeared / The time he cut off one wife’s nose / for fooling around.”

The book wouldn’t be complete, however, without the more personal poems in the collection, evoking intimate details with which even the most distant of foreigners can empathize. The recollection of a familial heirloom in “Our Grandfather’s Turquoise Ring” could be the impetus to remember what is sacred, and how sometimes that’s a quality formed over time, like a jewel.

Perhaps the most resonant poem in the collection is “The Haunted Secretaire,” a chronicle of how an antique writing desk survived through the years, neglected behind boxes in garages, mold gathering on its wood surface, until it was restored and relocated to a place where it could finally blend in. “Secretaire” is a poem about searching and belonging. It’s no wonder Low placed it at the end of her collection, to bid her readers farewell, for what is a ghost if not a thing that no longer belongs anywhere? When that writing desk, newly polished and dried, finally finds a home, it’s a way of saying, “Be haunted, and then be alive.”