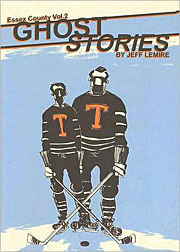 Ghost Stories is the second volume in Jeff Lemire’s graphic novel trilogy Essex County, but simply to label the book “part two” would diminish the satisfying completeness of this distinctive work. Although delicately connected to the first volume, Ghost Stories stands alone and stands out among recent publications in this ever-growing medium.

Set within the fictionalized version of Lemire’s hometown, Ghost Stories follows the relationship of brothers Lou and Vince Lebouf. The oldest, Lou, suffers from a form of dementia in the final days of his life. Through his diseased hallucinations, Lou drifts from present to past, forced to relive a lifetime of regret and self-inflicted isolation. He first returns to his youth, skating on an icy creek with Vince near their childhood farm in Essex County, Ontario. Then he’s a middle-aged man living in Toronto, playing semi-professional hockey for a struggling team called the Grizzlies. One day, Lou welcomes his kid brother to the big city and to the team. Soon, the young rookie propels the Grizzlies into the playoffs, and Lou’s fading dreams of NHL superstardom are reborn in his brother’s skates.

Unfortunately, Vince’s plans don’t include the NHL. He wants to return to Essex County, inherit their childhood farm, and start a family with his girlfriend, Beth. Perhaps Lou feels a sense of contempt for Vince’s seemingly naïve decision, or maybe he longs for his brother’s sense of purpose and direction. Whatever the reason, Lou finds himself alone on a snowy rooftop with Beth late one night in Toronto, and they become intimate. Moments after, Lou stares up into the darkened sky and recalls, “That was the last time I would ever touch her.” On the next page, he’s an old man, looking up into the sky again, stating, “And then I was alone.”

These two lines typify Lemire’s spare yet wonderfully effective narrative skill; each concise sentence teems with human complexity. In one moment, Lou is a selfish young man, considering only his physical desires; in the next, he’s filled with regret and wanting nothing more than to take back his mistaken actions. At times, these polarized emotions happen simultaneously—the characters are often perfectly confused and undecided in their actions—and Lou’s own inner conflict becomes more apparent as the story continues. Soon after the one-night affair, Beth becomes pregnant. She and Vince get married and they move back to Essex County as planned, leaving Lou alone in Toronto. After a career-ending injury, Lou finds a typical blue-collar job and becomes another nameless soul, absorbed in the vastness of the city. Without hockey or a family, he realizes, “There are only two ways to be completely alone in this world…lost in a crowd…or in total isolation.” Coming from another author, this statement might feel blunt and contrived, but Lemire entangles the words in the complexity of his characters. From Lou’s delusional remembrances, the statement is not an insightful musing but a regretful deliberation with his own mistaken past.

Lemire’s black and white illustrations echo this simple and effective narrative tone. The lines are loose, ragged, and often delicately thin; at times, they feel like casual wisps of a brush. The style, however, is undoubtedly purposeful and refined. The delicate strokes are most effective in the face of each character: when Lou returns to Essex County for his mother’s funeral after decades of loneliness in Toronto, his eyes, once dark vessels of optimism, have become tired, weary circles. After the service, Lou meets his niece, faces Beth for the first time since their affair, and confronts Vince; during this climatic moment, the lines in each of their aging faces appear as fragile as the threads holding the relationship together.

Although the moment is highly emotional, Lemire avoids sentimentalism. Instead, the reunion is tragically ironic, like the rest of Lou’s remembrances; he carries a disease that forces him to revisit these haunting moments, only to discover that he can never truly return. This beautifully crafted story secures Lemire’s place among the best young cartoonists in the Americas.