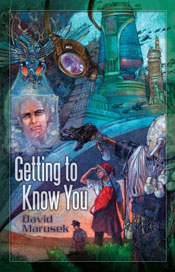 David Marusek isn't one to rush a page. The Alaskan science fiction author's first novel—2005's widely praised Counting Heads—evolved over nearly a decade. Thirteen years in the making, Getting to Know You's ten stories and novellas represent all his published short fiction to date. That many ended up feeding the novel only attests to their creator's meticulousness. “I obsess endlessly over my stories,” he writes in a back-cover blurb. “I boil them down to their gooey essence and then boil them again for good measure. I squeeze them onto the page like frosting on a cake. I lay them like traps and bait them with shiny ideas.”

What Marusek doesn't mention about his narratives—mostly depicting domestic life in the late 21st century—is that their extended gestation periods make for thoroughly iterated plots and beautifully developed characters. Not that he's tech-shy: artificial intelligence, cryogenics, space travel, biological warfare, radical life extension, and human cloning all figure in the collection, integrated gracefully and nonchalantly into plot lines and characters' lives. Nor is he stingy with speculation, although “extrapolation” might be more apt: “The Wedding Album” alone offers future enough to spark hundreds of discussions about the potential rights of artificial people. Still, protagonist Anne and her husband Benjamin—sentient digital simulations of a couple on their wedding day, doomed to forget their lives and their relationship at the flick of a switch time and time again—never fail to dominate the Sturgeon Award-winning novella as they travel through decades, then centuries, outliving their flesh-and-blood counterparts as well as the culture that created them.

AI looms even larger in “We Were Out of Our Minds with Joy.” Marusek's account of a magnificently failed marriage between an artist and a powerful politician draws as much vitality from the former's intimate relationship with his loyal “belt valet” Henry—a digital assistant with more personality than a dozen talk show hosts—as it does from any of its meatworld liaisons. A similar human-AI link drives the title story, a tale of treachery and missed opportunities that highlights some of the darker aspects of Marusek's future world, where enhanced intelligence and near-immortality are freely available to anyone with the dough—assuming he or she doesn't get taken out by hostile nanobots, biological nasties, or the security-crazed government.

Captivating as it is, the Counting Heads-related stuff will be mostly old hat to those who have read the novel, but the freestanding stories offer plenty of incentive for all but the most jaded reader. While he doesn't use his home turf as a setting often, he uses it adroitly (as can only be expected from a writer whose home life in the Arctic features regular trips to the outhouse). Marusek's first published story, “The Earth Is on the Mend,” transforms post-apocalyptic survivalist tropes with a brutishly sophisticated meditation on the rebirth of hospitality, while “Yurek Rutz, Yurek Rutz, Yurek Rutz” sidesteps SF conventions altogether in favor of refreshingly accessible metafiction.

That so many of the collection's stories run long is telling, especially given their eventual destination. Fact is, Marusek's predilection for developing his material so thoroughly lends itself to novel writing, as does the pittance most SF publications offer for short fiction. Still, his capacity for invention is such that it's reassuring to think that we might get another collection equal to Getting to Know You a decade or so down the road.