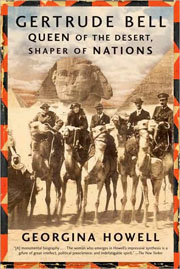 Georgina Howell’s Gertrude Bell is two books in one. On the surface, the subject is the life of archaeologist and British political officer Gertrude Bell. While rich in details, however, Howell’s biography comes no closer to answering the nagging questions that fan interest in Bell eight decades after her death from an overdose of allobarbital at her home in Baghdad. Howell attempts no analysis of Bell’s obsessive lifelong devotion to her father and her desperate need for his approval even when she was middle-aged, independently wealthy, and an experienced caravan administrator and British political officer. Her father’s centrality in her life and her almost pathological fear of physical sex hampered her ability to form significant emotional attachments with eligible men in her adult life. Bell traveled like a queen while exploring the Middle East—bossing men, entertaining tribal chieftains on their own terms, flaunting her otherness—yet when in England, Bell behaved like a dutiful Yorkshire spinster. How should one reconcile the conflicting facets of Bell’s personality? Howell discusses only Bell’s external persona, even while making copious use of Bell’s voluminous correspondence.

The far larger and more pressing subject of Howell’s book is Iraq and the current problems in the Middle East, many of which have their genesis in British foreign policy decisions Bell helped draft following World War I. Bell well knew that British oil interests were the defining factor in British foreign policy; Arab self-determination was merely a political ruse to legitimize the British occupation of former Ottoman territory. Yet she spent years using her personal connection to convince tribal chiefs of British goodwill toward them. Unlike T. E. Lawrence (of Arabia), Bell never indicates she was troubled by her duplicitous behavior.

As early as 1919, Bell was worried about Kurdish demands for independence and how unrealistic a combined Sunni-Shiite government would be in Iraq. In letters to her father, she repeatedly mentioned “the fundamental split between the majority Shias—unworldly, apolitical—and the minority Sunnis—educated, powerful, financially astute.” Bell fought with Winston Churchill over the fact that there were too few soldiers to keep order in the country, and that too many Arab lives would be lost trying to restore order. She also realized early on that the British (and Bell’s) handpicked candidate for King of Iraq, Faisal, must not appear to be a puppet leader but must convince tribal leaders to support him based on his own merits. She even acknowledged how unreasonable democracy is as a form of government in tribal societies.

Ninety years after Bell’s efforts, the U.S. faces many of the same problems in Iraq and appears to be repeating many of the same mistakes the British made. Regardless of the rhetoric about democracy and self-determination, the Gulf Wars have been fought to protect U.S. oil interests. A Sunni-Shiite coalition government still looks much better on paper than in reality. The Kurds continue to demand autonomy if not full independence. And too many lives have been sacrificed in pursuit of an ill-conceived and poorly administered duplicitous foreign policy.

Howell’s obvious fondness for her subject hampers her ability to construct a more objective and nuanced portrait of Gertrude Bell. Readers are, however, indebted to Howell for her decision to allow Bell to speak for herself by including quotations from many of Bell’s letters. Summing up the state of Iraqi affairs in spring 1920, Bell admits that events on the ground have overwhelmed British intentions. “We are now in the middle of a full-blown Jihad . . . Which means that it’s no longer a question of reason . . . The credit of European civilization is gone . . . How can we, who have managed our own affairs so badly, claim to teach others to manage theirs better?"