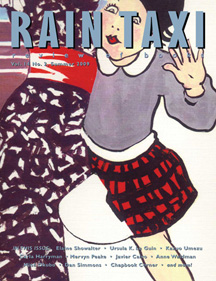 George Schneeman, a native of St. Paul, Minnesota, began painting in 1958 in Italy after graduate work at the University of Minnesota and service in the US Army. Nine years later, he moved to New York City with his wife Katie and engaged in the burgeoning scene around The Poetry Project at St. Mark's Church. There, Schneeman began collaborating with poets Ted Berrigan, Larry Fagin, Alice Notley, Anne Waldman, Ron Padgett, and others. It is for these spectacular and energetic works that he is best known. While some collaborations were conventional (e.g., accompanying illustrations for friends’ books), others went beyond categorization. Ron Padgett described the process in a recent New York Times article: “We would simply get together at his studio, using whatever materials were at hand. We would work spontaneously, sometimes on as many as five pieces at once, going back and forth between them, adding and subtracting and changing.” In 2004, Padgett edited Painter Among Poets: The Collaborative Art of George Schneeman, published by Granary Books. Schneeman’s solo work has been exhibited at the Fischbach Gallery and Holly Solomon Gallery, both in New York, and at the Denver Art Museum, CUE Art Foundation, and other public and private institutions.