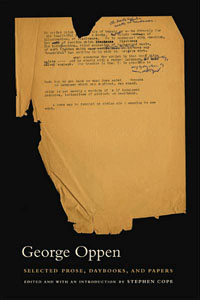 Over a decade in the making, Stephen Cope’s edition of George Oppen: Selected Prose, Daybooks, and Papers is an in-depth presentation of Oppen processing the poetics behind his highly acclaimed poetry. Book-ended by a section called Prose (which includes the essay “The Mind’s Own Place”) and a section called Papers (made up entirely of “Twenty-Six Fragments,” his reputed last writings), the main attraction for most will be the section called Daybooks, which makes up the core of the volume.

As Oppen worked on his books, rather than keeping a notebook to process his thoughts he would use single leaves of paper, variously typing or writing on them by hand. He then idiosyncratically bound them using materials such as pipe-stem cleaners or paste, and in one case a single nail hammered into a block of wood. Michael Davidson, editor of Oppen’s New Collected Poems, named these handmade books “daybooks” in 1985, when he published a transcription of one of them in an Oppen feature of the journal Ironwood.

In an illuminating discussion about the daybooks, Cope writes, “Akin to. . . notebooks, journals, diaries, and the like, these papers are finally none of these; nor are they fully letters, essays, or aphoristic statements.” Oppen never intended these books to be published; they were meant entirely for his own use in processing his poetic work. It is for this reason that they are so disorganized, or, to use Oppen’s words, “a nightmare of bric-a-brac.” Cobbled together—often even on the same page—are notes on Cold War-era politics; annotations to the philosophers, poets, and writers Oppen was reading; reflections on poetic process and the public and private lives of the poet; and, among many other things, thoughts on what Oppen often refers to as “the women poets” (which points to a complex, problematic issue within Oppen scholarship: his attitude toward feminine subjectivity).

Leafing through the bric-a-brac, what makes the daybooks so engaging is that we are able to see Oppen’s process at work. Cope has been conscientious to present the pages of the daybooks, as well as those of "Twenty-Six Fragments"—with all of their cross-outs and overwrites—in a manner that gracefully displays a "textual vitality," as Cope puts it, without falling into incomprehensibility. To do this, he developed a comprehensive textual apparatus that uses roman text to indicate typed passages; italicizedtext to indicate handwritten passages; [brackets] to indicate indecipherable text; ^arrows^ to indicate insertions; strikethroughs; and so on.

In page after page, Oppen’s exacting mind is active, such as in this passage about a poem by Oppen’s admirer, Armand Schwerner:

Fucking and even bucking— Alright ^Ok by me^.

While there is obviously a difference between the statements “alright” and “ok by me,” the difference is on a micro-semantic level, and we see Oppen—famous for the attention he so strenuously pays to the “little words”—weighing these micro-differences throughout the daybooks. It is no surprise, then, that in a later daybook entry we find the following passage:

I mean my work to be a process of thought. Which means I am the literary equivalent of the scientist. not of the [ ]—not, that is to say, the entertainer.

But not to be overlooked is the section of Oppen’s published prose. In addition to “The Mind’s Own Place,” Oppen’s single comprehensive statement of poetics, there are several short reviews and a few scant notes on individual poets. These make up the entire corpus of prose published in Oppen’s lifetime. One piece, titled “Statement on Poetics,” which was written late in Oppen’s life and published posthumously, focuses on the relation of prosody to poetic process, and illuminates Oppen’s habits of revision:

Also not to be overlooked is the volume’s index, compiled by the poet Andrew Joron. In service to Oppen’s exactingness, Joron has suitably gathered an enormous span of subjects touched upon throughoutSelected Prose, which is quite a feat given the brambled nature of the daybooks. These subjects range from those already often associated with Oppen, such as ethics, sincerity, and truth, to those that have not yet been the focal point of Oppen scholarship, such as dreams, religion, and sexuality. It is a meaningful tool in a book that will undoubtedly deepen readers’ experience and understanding of Oppen, and broaden the scope of Oppen scholarship in the years to come.