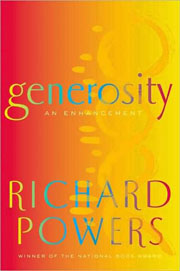 What most people want in life, more than love or money or power, is happiness. So imagine a somewhat depressive teacher encountering a young woman who exudes happiness—a happiness so contagious it infects everyone she meets. This is the premise of Richard Powers’s novel Generosity: An Enhancement. This book follows on the heels ofThe Echo Maker, which won the National Book Award, but Generosityis perhaps an even better novel.

The story centers around a college teacher named Russell Stone and his motley group of Creative Nonfiction students, which includes Thassadit Amzwar, a 23-year-old Berber Algerian whose life has been filled with tragic circumstances. Nevertheless, an effusive happiness radiates from every expression, motion, and utterance that she makes. Even coming to class, drenched from a storm, she laughingly comments, “It’s ridiculous out there! Fantastic!” Her classmates give her the nickname “Miss Generosity.” Everyone assumes she is a Muslim, but she declares, “I’m no believer. I’m some kind of half-Christian atheist.”

Unable to understand how Thassa can be so happy, Russell decides to consult a psychologist and finds one on campus, Candace Weld—a dead ringer for his ex and a kindred spirit. Shortly after Russell meets Candace, the class (sans teacher) decides to take Thassa to a bar and get her drunk. While she becomes inebriated, her happiness still manifests itself. Unfortunately, after the group disperses, “a massive, impassive monolith” named John Thornell tries to rape Thassa, but she manages to talk him out of it. Thornell turns himself into the police and suddenly Thassa is in the news. Before long, stories of her ebullient nature are on the Internet, and they catch the eye of one Thomas Kurton, a world famous geneticist. Kurton gets Thassa to agree to be a test subject and discovers that her genetic make-up is the “optimal allele assortment—the happiness jackpot.” Kurton even postulates he can take Thassa’s DNA and make virtually everyone happy.

Suddenly, due to her Internet fame and Kurton’s theory, almost everyone wants a piece of Thassa. Before long, her celebrity status leads to an appearance on the Oona Show, but the confrontational nature of the program makes Thassa defensive, and the frenzy finally begins to affect her emotional state. Even though Russell has fallen in love with Candace, he feels responsible for Thassa and agrees to help her escape to her uncle’s place in Montreal. Unfortunately, Thassa’s breakdown has gotten to the point that she’s like “some infected farm animal, brought low by something it can’t even imagine. Microbes without borders.” The end of the novel involves a near tragic scene with a powerful denouement for its characters.

Once again, Powers has produced a fascinating story partially constructed around his impressive acumen in the sciences. He also creates exquisite sentences, whether musing about love (“just a minor node in a vast network pushing toward new and unimaginable exploits . . .”) or language (“When white guys walking on strangers' roofs in Oak Brook start using any given street argot, it's time to seal the word up in the dictionary mausoleum”) —in fact, the reader might feel obliged to underline a passage on virtually every page of Generosity. With each novel Powers has added to his reputation, and this one is no exception.