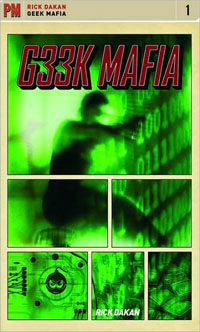 The hackers—or self-described “trolls,” hackers of a particular, trickster type—who recently flooded the Epilepsy Foundation web pages with fluttering, seizure-inducing color fields, did so for the particular joy of disrupting other lives, finding gleeful amusement in anarchic disruption, expressing this unique pleasure via the subgenre of on-line laughter known as “lulz.”

The geek grifters of Rick Dakan’s crime fantasy novels pull similar pranks for similar thrills, but they’re also in it for the cash. “This is just what we do for fun,” one character says—except, of course, that it’s also what they do for a living. Blackmail, demanding ransom, counterfeiting certifications of value for comic books, running an underground party. . . the list of crimes quickly reflects the quirkiness of this particular “crew.”

“Flat-out robbery and theft and even extortion were not the business they wanted to be in. Nor did they want to steal from anything who couldn’t afford it. They were supposed to be Robin Hood (or at least that’s what they told themselves so they could sleep at night).” But Robin Hood robbed from the rich and gave to the poor. These kids are anarchists, or claim to be, interested in causing chaos and making money.

Are they nihilists as well? It’s a little hard to tell too much about these characters, as characterization is one thing these books markedly lack. Two people tell each other, for instance, that they are in love, and one woman cries after she uses a remote control rifle to blow off a man’s head, but the outward expressions don’t seem reflective of any real inner life, just gestures to help move the plot along, get the guy in bed with the girl, get the crew out of one danger and into another.

Geek Mafia is set some years in the past, with lots of Internet chatter and more of a pulp edge. Mile Zerois set in Key West, where the grifters live out a sort of adolescent fantasy of high-tech play. It reads at times like a homage to Scooby Doo (with, of course, a cross-dressing Kung Fu expert), and defies not only logic but also its own attempts at reference to the real world. While the time is “post-911” and “institutional paranoia and limitless homeland security spending” are referenced, our characters live safely on Red Bull and string cheese, playing video games and rolling marks, fucking from time to time and keeping Hello Kitty gas masks under the bed. 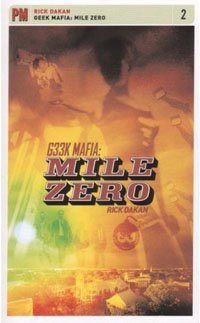 The absurdity of the plots—electrified floorboards of a fortified house, the seizure of a pirate museum for a confrontation with a villain—wouldn’t matter so much if these novels didn’t come across as disturbingly vacant responses to well-publicized trends of contemporary life. While we, the readers, live increasingly in a surveillance state, Dakan’s crew lives in a world with an endless supply of endlessly hackable cameras and video screens. While we live in a society defining itself via voyeurism and self-exposure, Dakan’s grifters drift in and out of nude patio bars and live “off the grid,” not through layers of carefully fabricated identities but simply by being invisible, holed up in their headquarters or chasing after bad guys and marks in total anonymity, all the watching cameras neatly turned off. And when an older character says he respects Hunter S. Thompson for his ability and willingness to “speak truth to power,” it’s anachronistic; in the world Dakan creates you make your own power, and “truth” isn’t much of a worry. “NSA intercepts and FBI investigations and CIA assassinations” are mentioned in a speech intended to sound darkly prophetic, but the character giving the speech has just been beaten, and is a paranoid relic of another era, the world of the Weather Underground and a yearning for revolution rather than the world of Grand Theft Auto and the small pleasures of criminal pursuit and nerdy style.

Perhaps most disturbingly, “classic anarchy” in Dakan’s brave new world is represented as the incorporation of different grifter crews: “Why not model ourselves after the paragon of right-wing capitalist greed and exploitation?. . . I’m talking about a privately held, foreign-based holding corporation that can let us pool our resources, launder money, provide ready-made cover, establish untraceable lines of credit, even buy and sell real estate and big ticket property. Hell, even provide health insurance.” Meanwhile, the sorts of crimes presented as “practically a victimless score” hurt not only individuals—say, the man who believes his daughter has been kidnapped by thugs—but also the ideals of a non-anarchic world, what we call “society.” Protesting franchise corporate coffee by spraying fake blood over a crowd as part of an elaborate plot to extort right-wing talk radio listeners because they are “the most credulous, illogical people out there” isn’t good satire, it’s just taking the conventions of democracy—critical thinking, civil conversation, and peaceful demonstration, to name three concepts Dakan’s characters would find painfully stale—and disrupting them for the sake of cheap lulz.