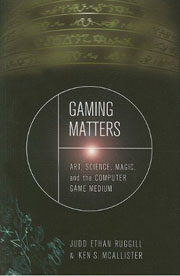 The titular conceit of Judd Ethan Ruggill and Ken S. McAllister’s new course-correction for video game criticism is equal parts “fun and brimstone”: Gaming Matters is a playful exploration of the allegedly boring, manipulative, duplicitous, and labor-intensive elements of an “alchemical” medium most readily understood through debasement and dissolution . . . or disillusion . . . or both. Lifting the veil on the production of video games and their attendant scholarship, Ruggill and McAllister focus overdue attention on the medium stripped of its video effects, story, marketing, and style. Exploring the uninteresting and coercive drudgery at its core, they contend, will teach us how the best games expand our sense of self, world, and moment, and how the worst will reduce us to laborers doing cultural work on the medium’s market’s behalf.

This is an enjoyable and provocative intervention launched from an ivory tower of gaming: Ruggill and McAllister have a record of influential publication, co-direct the Learning Games Initiative (a trans-disciplinary research group focused on the study of video games), and curate one of the largest game archives ever assembled. Never mind, then, that the first third of their short book is over-steeped in description of the medium’s disparate, “irreconcilable” discourses. Few others so ably address the scholarly, corporate, and political forces whose (often disharmonious) rhetorics will shape video games’ historical and future import.

Ruggill and McAllister wield Gaming Matters against current thinking across domains—and solicit the attention of gaming readers everywhere—by labeling the medium “inherently boring and therefore obligated to constantly hail players to keep them interested.” From Desert Bus toDeus Ex, they argue, players are plagued by video games’ “aimlessness,” where everything from predictability to erratic and unstable plot development, from mundane and repetitious tasks to a “perpetual discomfort [generated by] tension, frustration, failure, and even physical pain” requires that games aggressively and incessantly commandeer “personal experience, private fantasy, and public opinion in order to become culturally viable.”

As disconcerting as it may be to reflect on one’s gaming history through such a lens, it is worth noting that this critique burns brightest in the presence of failed games, the meaninglessness of bad stories, and the anti-art of technological reproduction. What medium is enjoyable absent skilled hands and the sum effect of its methods of meaning-making? Film denuded must be at least as boring; there’s nothing more inherently interesting about a jump cut than a cut-scene, until, for instance, we’re comparing Kubrick to Quake.

Where their argument might dead-end at “boring media are boring,” Ruggill and McAllister make real in-roads describing the incessant ways video games draw gamers from boredom into engaged play. All media operate by making demands on consumers’ attention, but video game players are hard-wired into the (inter)active creation of “the narrative, thematic, and ideological structures that determine the artifactual and medium-focused experience” of the games they’re playing. The acts of learning and improving skills required by unique games not only “transport players into a different sort of consciousness,” they ensure “the work of culture formation [is] being done on players” as they play.

Unpacking this work of “culture formation” is at the unspoken heart of Gaming Matters. Learning to play a game is the equivalent of learning to inhabit a subjectivity that is at once singular (to the experience of the game learned), social (shared with other players of the game), historical (via the experience of previous game-subject positions), and hopelessly imbricated in a commercialized system (to know a game from its player-perspective is to hear, answer, andrecreate through play its invested codifications of social relations and incessant advertisements).

Ruggill and McAllister frame this process as “manipulative and duplicitous” not only because it assuages boredom with artifice and interpellation, but because the majority of games “balloon” the importance of the present to meet economic pressures: “As the ludic golem of a game takes form, a long past of earlier games congeals into its husk until the medium is transformed into a single artifact that exists as a game only when it coexists with the now of player(s) playing.” How easy it becomes, then, to re-package and re-teach history as a series of related game subjectivities that point endlessly toward the saleable future.

It’s true that for the video game industry, there is no more important moment than this “now” of active play. Most new games have a very short window of profitability, massively emphasizing their need to hook players with replay value and downloadable “add-on” content. Yet the same duplicities that generate sales, manufacturing and relieving us of our boredom in a recursive, culture-forming loop, can yield more important and worthwhile takeaways. While inhabiting good games requires a complicit casting of oneself under the enchantment of enjoyable subjectivities, it also requires real imaginative investment in and reflection on a simultaneous perception of self, self-in-history, and self-as-history.

For Ruggill and McAllister, this experience can be as poetic as it is enjoyable: “Like a splendid and ageless soul remembering itself before its fleshly catchment, the anamneses of the greatest computer games do not freeze time so much as obviate it.” And for (and in spite of) all their calculated invective, theirs is often an aesthetic and captivating argument. Readers interested in how and why video games are changing the way we relate to each other and technology in general, and commentators actively re-making discourse to fit the aggregate, evolving video game medium, will find playing with the ideas in Gaming Matters can be insightful, challenging, and well worth the time.