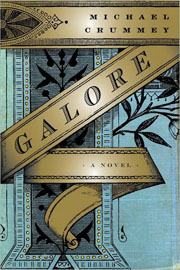 It’s common to say that a book paints a vivid picture, or to remark on the sound of its prose, but somewhat more rare to claim that a book has a distinctive smell. Galore is an exception, carrying a pervasive odor of fish and the sea that’s both distinctive and unforgettable.

The fourth book and third novel by Canadian author Michael Crummey, Galore is set on an isolated scrap of shoreline in Newfoundland, where villagers make a meager living from cod fishing. The story begins sometime in the very early 19th century when a whale is beached on the shore and the villagers, hacking up the corpse for meat and oil, find a man in its stomach.

Against all odds, he proves to be alive. Mute, albino, and emitting “an astonishing stink of dead fish” no matter how many times he is bathed, he is given the name Judah—a compromise between Judas and Jonah, because the illiterate villagers can’t agree which one was swallowed by a whale. He soon becomes the center of this winding saga of life in a place usually just called “the shore.”

The community where Judah arrives is split in two. Paradise Deep is a predominantly Protestant and English settlement, lorded over by its founder, King-Me Sellers, a merchant who controls the price of cod. The Gut, which lies on the other side of a windy and treacherous point, is mostly Catholic and Irish. Here, the novel focuses on the Devine family, led by a matriarch everyone calls Devine’s Widow. She may or may not have some supernatural capabilities; either way, her leadership of the family has effects that echo over the hundred-year span of this book.

Judah is the most original figure in the story, but the most important point-of-view character is the widow’s granddaughter, the sharp and slightly witchy Mary Tryphena. It’s from her perspective as a young girl that we see Judah emerging from the guts of the whale. In fact she appears earlier than that, in the first paragraph of the novel: “He ended his time on the shore in a makeshift asylum cell, shut away with the profligate stink of fish that clung to him all his days . . . He seemed more or less content there, gnawing at the walls with a nail. Mary Tryphena Devine brought him bread and dried capelin that he left to gather bluebottles and mold on the floor.” A second glance reveals this to be not the beginning of the story but the end, and it’s just the first example of the book’s chronological slipperiness. Things that have not yet happened are presented as foregone conclusions: we are only three pages in when we’re informed that Mary Tryphena and Judah will marry, and for readers who pay attention to front matter, a family tree at the beginning lays out six generations’ worth of marriages and births.

The past, too, intrudes itself on the story. Things that have already happened are glossed over only to appear as narrative surprises later on. There is a ghost in this novel who gets introduced two or three times before the reader learns he is dead. Between episodes in Mary Tryphena’s life, the narrative slips back in time to tell us about her grandmother’s feud with King-Me Sellers, and how her parents fell in love and married.

Late in the novel, an American doctor who has settled in Paradise Deep muses on the local term “now the once”: “It was the oddest expression he’d learned on the shore. Now the once. The present twined with the past to mean soon, a bit later, some unspecified point in the future. As if it was all the same finally, as if time was a single moment endlessly circling on itself.” It’s almost too on-the-nose, like an author’s note that alerts us to what he was thinking when he conceived of this story. Time passes in this book—and it grows more chronological as the story progresses and runs out of past it hasn’t told us about already—but change happens slowly in this remote outpost. It’s easy to believe, in this context, that time is just one moment turning around and around.

Despite this changelessness, the novel is filled with events. There are a great many marriages and births, but Crummey keeps things interesting with profoundly odd characters and a language as distinctive as Judah’s odor. The narrative voice here incorporates broken sentence fragments, colloquial curses, and dialogue without quotation marks into a sharp, idiosyncratic style. It’s well suited to describing harsh things, like the Newfoundland winter, or the summer when fishing is bad:

Most were in arrears from one failed season aboard another and King-me forced the most desperate to grant him a mortgage on their land estates as a surety. He’d already taken possession of half a dozen fishing rooms and seemed determined to own both harbors entire. The spring’s whale meat was long gone and some families were surviving on winkles and mussels dug up on the beaches or the same meal of herring served morning, noon and night until a body could barely keep the fish down. The summer not half over and already there was talk of winter and how many would starve without help from God.

Galore has an epigraph from Gabriel García Márquez, and it owes a significant debt to his magic realism. The supernatural elements in this novel can be spotty—one is never sure how realistic the world of the shore is meant to be, and old curses and rituals sometimes disappear for generations at a time before appearing again—but these, along with the figure of Judah, provide unifying threads for what could otherwise have been a story with no natural stopping or starting point. It’s a compelling, haunting portrait of hard lives in a hard place, and for American readers in particular, Crummey’s Newfoundland may prove the definitive version.