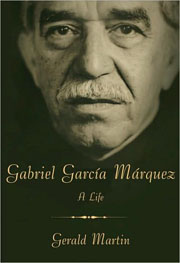 Many readers know Gabriel García Márquez only as the author of the classic One Hundred Years of Solitude, but there is, of course, much more to him, both as man and artist. Many of his books are as good as or even better than One Hundred Years—there is the unrelenting linguistic force of The Autumn of the Patriarch, the bare-bones suspense of Chronicle of a Death Foretold, and the dark romantic tendrils of Love in the Time of Cholera. And then there are the political stances—the long-enduring friendship with Fidel Castro, his conflicts with the U.S., and much more. Gerald Martin’s nearly 700-page biography goes a long way toward uncovering and weaving all these threads into a coherent design. Here we learn that the young Gabito, as he was known, had almost no contact with his mother when he was very young; how his grandparents and aunts raised him; how he struggled to find the confidence and courage to be a reporter in his dangerous and divided country, Columbia; we learn what town inspired the fabled Macondo in One Hundred Years of Solitude and what incident inspired Chronicle of a Death Foretold; about his travels in Europe, the U.S. and Latin America, his feud with Mario Vargas Llosa, and much, much more. There is a wealth of fact here, even if sometimes Martin attempts to tie all these facts too tightly together, as if a life might be made into a neat package with no loose ends.

Martin is not just García Márquez’s biographer, but also a dedicated fan of the author’s literary works and a supporter of his subject’s early and middle-years political stances. Martin continually offers examples of how Marquez’s personal life and political experiences shaped his fiction. At times these examples seem a bit strained: García Márquez was an illegitimate child, and Martin does a good job of explaining the complicated degrees of illegitimacy in the multi-layered society into which the future Nobel laureate was born. But in analyzing some early stories Martin comes down a little too hard on the role of legitimacy—even after he details how common it was to be and to have illegitimate children—and the examples he quotes more clearly show the young writer’s literary influences overriding any personal ones. Whenever Martin chooses to offer such relatively simple analyses of García Márquez’s life and writing, the book falters. But he excels at laying out complicated circumstances and the human failings involved, as when he writes that the budding author “could not bring himself to confess either to his impoverished family or to his future wife that he was willfully abandoning them for a significant period of time. . . His sense of responsibility was strong but the lure of Europe and the unknown was even stronger.”

García Márquez struggled to come into his own. Even with the best of instincts and an early sensitivity to the injustices in his country, he was no literary or political prodigy. In 1948, for example, 21-year-old García Márquez was a student in Bogotá. He and Fidel Castro—then a participant in a student conference to oppose the formation of a conference that would set up the Organization of American States—were both in the city when an important liberal leader was murdered in the street. Castro, the future revolutionary, took to the streets but the aspiring author and his friends “heard [the] call to arms on thepensión radio but they did not answer the appeal.” Castro tried to rally the rioters for a revolution; García Márquez only mourned the loss of his typewriter when the shop where he had pawned it was looted. Martin’s conclusion to his telling of this episode is characteristic of his insistence on finding a positive angle and lasting significance in even the most equivocal incidents in his subject’s life:

Slow as he was to develop a mature political consciousness, there were significant lessons that García Márquez had now assimilated about the nature of his country; as he had lost or abandoned most of his material possessions, these new lessons were perhaps the most important things the young man took with him on the plane to Barranquilla and Cartagena.

Martin identifies the emergence of García Márquez as a mature storyteller with a 1954 newspaper article he wrote about a landslide where a hillside community had collapsed with heavy loss of life. He was sent by his editor to discover whether this could be attributed to government corruption and shoddy building practices. On arriving in a nearby town, “he felt sick with nerves and totally intimidated by the physical challenge and the moral responsibility; he almost resigned from the newspaper on his first day in Medellín.” He gathered his courage and the end result was a piece that, in Martin’s words, converted his “world-view into a set of journalistic ‘angles.’ . . . [The] great story-teller ‘Gabriel García Márquez’ had finally appeared on the scene.”

While Martin strives to describe how García Márquez has combined autobiography, myth, language, and literary traditions into the singular style of his works, the literary analysis portions of this biography never quite touch the heart of the writing. His commentary is much more convincing when he describes personal relationships and speculates on emotional triggers for actions. But Martin’s real strength—and, clearly, his main interest—lies in his eye for the political dynamics, particularly the place of socialism and communism, that have influenced García Márquez’s life and works. Throughout his writing life, García Márquez has self-consciously kept in mind a responsibility to engage with the political. When his novel Leaf Storm was published in 1955, he “would confess. . . that he had developed a guilt complex because Leaf Storm was a novel that didn’t ‘condemn or expose anything.’”

The political aspect would grow over time, at times dominating García Márquez’s thoughts and work, and even his movements. He traveled to Poland and Czechoslovakia (where he was disturbed by the inhabitants’ disinterest in politics), to Auschwitz and even to Moscow—for the latter, oddly, as a singer and drummer in a musical troupe. He has been an unwavering advocate for Castro’s revolution. He invited the Sandanistas to meet in his living room in Mexico City. Martin is very strong on how such alliances came about, and how García Márquez has rationalized the unsavory aspects of some of the regimes with which he’s allied himself. When the Hungarian Communist leader had a prominent opponent executed, he wrote of the execution as “an act of political stupidity” while blaming Kruschev’s influence:

It should perhaps not surprise us that the man who wrote it, who at this time clearly believes that there are “right” and “wrong” men for particular situations, and who cold-bloodedly puts politics before morality, should eventually support an “irreplaceable” leader like Fidel Castro through thick and thin.

But Martin has enough detachment to ask the question of whether García Márquez been “writing about men of power, to men of power, or for them?”

As the acclaimed author has moved into old age, struggling with lymphoma and Alzheimer’s, politics has become less important to him. Of what is likely to be García Márquez’s last novel (translated in 2005 asMemories of my Melancholy Whores) Martin writes that the novel “has both an unashamed and unattenuated flirtation with fantasy and a conventional moral dimension that most of the others quite deliberately lack,” and that, “the ending takes García Márquez to the end of his literary and philosophical journey through life.” Martin, who clearly has great affection for both the man and his works, details this journey, recognizes its inevitability, and yet implicitly criticizes it. In the last third of this book, as he describes the aging author’s turn toward more personal subjects and a more comfortable relationship with capitalism, Martin’s own strong political positions intrude more insistently on the narrative. (He seems to have a particular dislike for President Jimmy Carter, at one point comparing him to Pontius Pilate.) At times the narrative language grows a bit shrill: “He decided to make not a clean breast of it but the best fist of it.”

Martin is surely correct when he writes that One Hundred Years of Solitude “tapped the DNA of Latin American culture,” but this and many other of García Márquez’s works pulled free of any narrow regional identity by capturing the emotional and intellectual DNA we all share. While at times all the detail here narrows rather than opens up García Márquez, Martin gives us great insight into the author’s complex life of struggles with others and with himself as he created some of the most unforgettable fiction of the last fifty years.