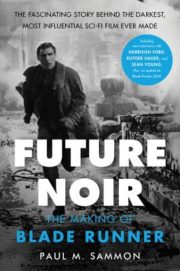 Blade Runner, though not a cinematic blockbuster, ranks up there at with the very best of science fiction films. Credited with revolutionizing science fiction filmmaking and heavily influencing the cyberpunk subgenre, the film presents a post-nuclear world in a state of anarchy, a dystopian setting with pollution that has caused permanent night and a police division that can kill the artificial life humankind has created without a trial or consequence. Despite the dangerous pollution on earth—the opening scene of the film landscape was actually called “Hades”—people are stuck on the planet even though they would like to go to the stars.

Future Noir, originally published in 1996 and now in its third edition, does a great job of exploring the film in depth (or perhaps I should say “films”; there have been seven different versions due to studio demands at the time, and more recently a sequel). Though loosely based on Philip K. Dick’s novel Do Androids Dream of Electric Sheep? the film moves the story out of the Bay Area and cuts some of the novel’s major elements, namely a fictional religion called Mercerism and dystopian society’s use of live animals as status symbols. Most life is now dead because of DNA-destroying radiation. Androids, here called “replicants,” have been created to be “more human than human” but they lack empathy. “Blade runners” are supposed to eliminate them from the population.

There is really not a hero in the movie; this is a film about replicants who cannot fit in. Dick was not thrilled about the adaptation process, and he died before the film premiered, but he knew it would change science fiction. He has since received a “cinematic rebirth” of sorts; so many movies have been based on his books, with more coming—which is good since his books usually explore dark undercurrents in society and politics.

Future Noir, which runs almost 600 long pages and contains interviews with director Ridley Scott and some of the actors, is the bible concerning Blade Runner. For those who want to know about all the infighting and struggles of putting a film together, and what is sometimes lost and misunderstood in the process, journalist and film insider Paul M. Sammon has done a monumental service.