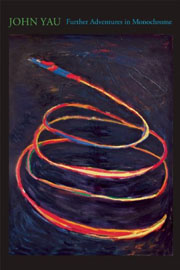 Some readers may find it strange that John Yau’s new book, his thirteenth collection of poetry, is titled Further Adventures in Monochrome. For one, the work is colored by the various objects and voices inhabiting it—nothing feels single-hued here. What’s more, the various transformations throughout the book depict a vibrant and evolving imagination. Yet as colorful as Monochrome is, the poems are infused with a melancholic sensibility indicative of the shifting identities therein. For readers of Yau’s work, this is not an unfamiliar theme; his poetry is split between his backgrounds as Chinese and American, poet and art critic, lamenter and humorist.

Certainly, however, this new volume furthers Yau’s aptitude for formal invention, displayed vividly in 2006’s Paradiso Diaspora (Penguin Books). Here he engages everything from haiku to prose, as well as the increasingly popular “singlet.” The long poem “Genghis Chan: Private Eye” includes a stunning sequence of visual pieces recalling—though not beholden to—the L=A=N=G=U=A=G=E poets, while the title sequence is a powerful reverie in the voice of painter Yves Klein. Further Adventures in Monochrome is a new achievement from a long-established poet, yet again challenging the boundaries between language as meaning, sound, symbol, and art.

The collection opens with a pantoum, “Chinese Nightingale.” Natural to this form, the first and third lines of each stanza inherit the second and fourth of the one prior. Unlike some other pantoums, which alter the words in each line to fit the new stanza (logically, grammatically, or otherwise), Yau permits very little change, and the small changes he does allow nuance the text to create new meaning. For example, the first stanza reads as follows:

Hair burned white, teeth leaving one by one
More clouds dance past my crumbling hut
Pirouette and wave farewell. They will reach you
Long after I’ve turned to snow, your secrets still safe

In the next stanza, lines two and four appear almost unchanged (except for a small grammatical amendment), but when lines one and three resurface in the final quatrain, the first reads, “Hair turned white, teeth leaving one by one” (italics mine). The adjustment is slight, but the transformation from “burned” to “turned” is significant. The former feels surreal and suggests trauma; the latter is realistic, merely implying age. The placement also recontextualizes the line. When it appears in stanza one, the line refers to the speaker’s hair. In the last stanza, it refers instead to a woman’s: “Yesterday, she stopped wiping her tears and smiled.” Together, these lines form a loose narrative, and suggest healing as that story unfolds.

Yau’s talent for formal verse peaks in “Ventriloquist,” a poem dedicated to Jasper Johns. Although the poem uses repetition similar to a pantoum or villanelle, the form is Yau’s own. Using collage techniques akin to John Ashbery, Yau recycles and collapses language in each tight tercet:

The unpatterned repetition discomforts the reader, which parallels the ventriloqual tone, as if the words derive from a voice other than the speaker’s own. That feeling is only alleviated in the final stanza, where Yau writes, “Every period is a period of unsettled language.” That mechanical conventions fail to “settle” language strips significance from poetic structure, justifying the looseness of this poem’s form.

Among the most diverse pieces in the book, “Genghis Chan: Private Eye” demonstrates Yau’s capacity for pun, along with his awareness of duality. This poet is always conscious of the numerous meanings and connotations within a given word. Most intriguing are the “ideogram” sections, where Yau exploits the visual component of written language. The first ideogram reads:

Spoken aloud, readers will likely hear “Beware: free advice for a stranger”—or is it, “flee advice, forest ranger”? Yau revels in the ambiguity, though he is less enigmatic in other segments. The third ideogram reads:

In each of these instances, readers hear “sacrifice,” but by presenting the collection of sounds in a mixture of visual forms, Yau highlights the numerous meanings and connotations embedded in this word. Syntactically, “sacrifice” could be a noun or verb, and its possible meanings are quite numerous. The word may refer to personal sacrifice, as in a time of dearth (“sack of rice”); sacrifice in order to limit temptation or pleasure (“sack her vice”); or sacrifice for the purpose of self-abasement or religious purification. The latter is supported in the fourth ideogram, exhibiting Yau’s attitude toward faith:

The innovations in this book, though at times subtle, reaffirm Yau as a master of change—his acrobatic grace with form, paired with his eye for multiplicity, places him in the front rank of American poets. While we are likely to see much more from Yau, Further Adventures in Monochrome urges us to review his career with a sharpened gaze, and consider his true versatility.