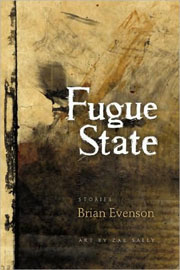 What is it that makes a story scary? Explanations tend to make it fall apart, but you sure know it when you see it. Similarly, it’s hard to articulate what makes a joke funny. In person it can be as tiny as a sideways flick of the eyes or a minute gesture, anything that speaks to the truth. Likewise in writing—it’s the small things, the perfect details and linguistic tics, that hint at the heart of the matter, the thing the writer doesn’t come out and say.

In this collection of nineteen short stories, Brian Evenson spends most of his energy flirting with either funny or scary, often both at the same time. Some of his tales are set in apocalyptic or post-plague times, some are otherworldly, and some—maybe the strongest ones—unfold in places we recognize all too well.

Take “Ninety Over Ninety,” in which a wannabe literary editor gets talked into buying silly books that are more “marketable.” In this setting, Evenson is able to take a swipe at the big-money publishing industry and the crass, dumb, and dishonest ways it sometimes goes about doing business. A few of the gags are a bit broad, like the way the oily boss calls our editor-hero by the wrong name throughout the entire story (does this ever happen in real life, or just in books and movies?), and the groaner name of a rival publisher, MacMaster & Bates. But other gibes are apt and clever, such as the book ideas pitched at an editorial meeting and the daftly enthusiastic response they garner:

Things get much weirder from there, but the story’s central joke—the everyday horror of how the world, unfortunately, works—is deeply funny.

Children abandoned by one or both parents is another theme; “Girls in Tents” could easily have the title of another story, “Life Without Father.” “Mudder Tongue,” a wonderful 2007 O. Henry Prize winner, is about a man whose use of language is slipping away, causing the wrong word to pop out of his mouth even though his brain knows the right one. Soon he can no longer teach his classes, and the absurd things he says to his grown daughter—in language reminiscent of a sadly comic Lorrie Moore story—infuriate and insult her, to his mounting despair.

Spooky little pen-and-ink drawings by cartoonist Zak Sally open each story in Fugue State, but only “Dread,” a short piece done in the style of a graphic novel, is fully illustrated. Sally, fast becoming an indie comics mainstay through publications such as Sammy the Mouse (Fantagraphics) and Recidivist (La Mano), deploys his scritchy drawings to add to Evenson’s overall sense of queasy unease, which tends to arise from the author’s restrained and distant language. The older sister in “Girls in Tents,” for example, is never explicitly described as scared, but listen to how she feels as she strokes her sister’s back to comfort her: “It was like she was petting an animal—or rather, since she herself, concentrating on staying as calm as glass for the sake of her sister, felt distant not only from her sister’s back but from her own hand, as if she were watching someone else pet an animal.” Evenson circles his subjects like a buzzard, creating a feeling of dread from that dizzy height.

Sometimes, though, his devices feel contrived. A powerful piece in other ways, “Younger” nevertheless batters us over the head with its refusal to name the characters; one can only read phrases like “the older sister felt” and “the older sister said” so many times before the repetition becomes distracting. Still, even this suggests the uncanny that lives within the ordinary. While Evenson’s characters are often doing something disturbing or gross, they observe eerie sensations that are all the more upsetting because they’re so commonplace. In “Life Without Father,” a short piece about a girl whose father dies sort of accidentally, sort of suicidally, the child experiences for the first time the sad gap between what we say and what others hear. “You could say what you thought was right, what would make sense to you, and nobody else really understood it,” she realizes, in trying to figure out how to tell the police that her dad had taken to putting plastic shopping bags over his head because this made his thinking more “lucid.” It’s a coming-of-age, Evenson-style.

And really, moments like this are what this book is about. These, just as plainly as the more obviously creepy scenarios—the ones that read like old-time horror stories, with the unseen ghost of Rod Sterling seeming to bear witness—are the fugue states of the title, the ever-present reminders that there’s plenty to be afraid of in the everyday.