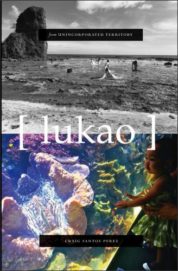 Where a banyan tree is adventitious, with its branches and roots growing in a promiscuous tangle, from unincorporated territory [lukao] by Craig Santos Perez is ordered and carefully wrought. Beyond this initial comparison however, Perez deploys the banyan tree as both metaphor and symbol of two interrelated political pairings: colonisation/decolonisation and militarisation/demilitarisation. The book pivots on the tension between these two pairings, and on another dichotomy: birth/death.

Like the branches and roots of a banyan tree Perez constructs a dense weave of themes that are bolstered by formal (linguistic, stylistic, typographic) techniques, a method he recounts in "ginen understory (i tinituhon)":

i taotaomo'na : the spirits of before also dwell within the space
of i trunkun nunu : the giant banyan tree, whose aerial roots fall
from branches, intertwine, fuse, and root // as time passes, new
trunks form until a single tree becomes an archipelago

Perez rarely uses language for singular meaning: "archipelago," for example, refers to the Mariana Archipelago of Micronesia in the western Pacific, and to the project of Chamorro self-sovereignty. Chamorro are the indigenous people of Guåhan (Guam) and the Mariana Archipelago. (Perez is Chamorro but grew up in San Francisco from the age of fifteen; he currently teaches at the University of Hawai'i.) In the above passage, "i trunkun nunu : the giant banyan tree" symbolises the project of remaking Guåhan into a place where "i taotaomo'na : the spirits of before" can once again dwell. The proliferation of the banyan tree into an archipelago is a metaphor of Chamorro self-sovereignty. As such the project necessarily invokes colonisation/decolonisation, militarisation/demilitarisation, and birth/death.

[lukao] means procession, a thematic that enables Perez to encompass Chamorro creation stories of Guåhan's origins; reflections on the chain of nations who have colonised Guåhan (Spain, Japan, U.S); his own familial history; religious rites; and the birth of his daughter Kaikainali'i (addressed as "[neni]"). These themes are distributed throughout the four main sections of from unincorporated territory [lukao] under five titles (one of which has five subtitles). This distribution enables variant iterations and repetitions of words, phrases, and typographic strategies such as: double forward and backward slash (\\ //); square brackets ([you] refers to Brandy Nālani, Perez' wife); faded type (for extinct birds); strikethrough text (for banned Chamorro birthing practices); italicised text (English translation of Chamorro words); colon with a space on either side, as in "i trunkun nunu : the giant banyan tree" (perhaps to give equal weight to the two languages); ~~~ as separatory devices, and # to indicate both digital saturation and recent (and on-going) political movements such as #blacklivesmatter.

This list, although fairly comprehensive, shines only small shafts of light onto a dazzlingly complex architecture that supports intricate, multilingual, multi-register layers of meaning. The use of the double forward and backward slash at the beginning and end of phrases (in some poems), for example, is not a typographical conceit, but perhaps instantiates kåntan chamorrita, a Chamorro practice:

. . . \\ they stood in circles and chanted rhymed
verses back and forth // [we] call this communal poetic form
kåntan chamorrita (which translates as to sing both forwards and
backwards)

There are many paths that sing forwards and backwards throughout this collection, but a good one to follow as it braids is lukao : procession. The first appearance of lukao occurs on the contents page with three untranslated Chamorro words held between tildes:

Although not a Chamorro speaker, I take the phrase to mean: water daughter water. Hånom : water occurs multiple times throughout the collection, and one close translation of håga' suggests daughter, which is fitting given that the birth of Perez' daughter Kaikainali'i is central to from unincorporated territory [lukao]. Kaikainali'i's imminent arrival is captured in the unspaced closing sequence from "ginen understory (i tinituhon)":

From birth, lukao leads the reader to Perez's grandmother, and the missionary strategy of the Spanish who colonised Guåhan in the mid-sixteenth century:

This religious mandate and the impact it had on indigenous ritual practices is subsequently narrated in the second iteration of "ginen organic acts":

the spanish brought their god and bible, suppressed the story
of fu'una and puntan, and forbade the procession
to laso fu'a in humåtak bay

Fu'una is the first mother of Guåhan creation stories, and Puntan, the first father (Fu'una's brother). Laso fu'a names the creation point in Humåtak Bay where life began. The sacral procession to laso fu'a is made banal in the ersatz Liberation Day parade each July 21 when Guåhan "celebrates" their "liberation" from the Japanese by the Americans in 1944:

From civic banality, lukao cycles back to a recuperation and reconstitution of the original procession to the creation point in the third iteration of "ginen organic acts":

on that day in 2014, the cultural groups our
islands are sacred and hinasso* revived the lukao fuha, the annual
procession to humåtak bay in honour of fu'una and puntan \\
silenced for centuries //

{*the name of another group, which "translates as imagination, thought, memory, or reflection"}

walks to her, opens her arms // grandma kisses her cheek,
breathes deep her baby scent \\ lukao between four generations

With the theme of lukao : procession, Perez weaves together the birth of Guåhan and his daughter, missionisation, religion, and the revival of ritual procession practices; through these manifestations Perez in turn encompasses Guåhan's historical and current colonisation and Chamorro resistance through reinvigorated ritual. The entire collection flourishes on this hinge of past and present: balancing loss with renewal, grief and anger with humor and touches of lyrical beauty. from unincorporated territory [lukao] holds the bitter (faded out calls of extinct birds) and the sweet (new life), as in the closing sequence from the fourth and last iteration of "ginen island of no birdsong":

i believe in the resurgence
of our bodies because
[we] are the seeds
ginen {from}* the last hayun lågu {native fire tree}
waiting to be rooted
into kantan chamorrita {to sing forwards and backwards},
waiting to be raised
once more into lukao {procession}