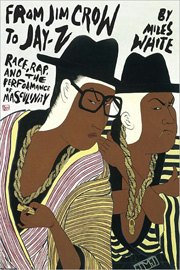 While the creative source for most American music has undoubtedly been black culture, what that means in the context of a media landscape primarily driven by white consumption is more difficult to discern. Beginning in the early 20th century with the advent of sound recording, music was for the first time exportable from the site of its production, with the consequence that, as Miles White writes in From Jim Crow to Jay-Z, this technology “set the circumstances that made possible a distancing of black music from its socio-cultural origins in a way that would allow it to be claimed as cultural property by others.” The commodification of music was underway, and so too the foregrounding of the sad truth that “the historical love of black music by whites in the United States has always been troubled by the fact of blackness itself.”

Much of the contemporary popular music situation follows from this tension—artists like Elvis, Bob Dylan, the Rolling Stones, and Eminem have reached levels of success far beyond those of the black artists their work derives from. But White thinks we need to look farther back if we’re going understand the complex relationships between race and music in this country. He argues the categories we use to identify black males, especially “hardcore” rappers, come from minstrelsy, which gave us the popular culture representation of “the folkloric bad nigger figure, a lawless man feared by blacks and whites alike.” This is a figure that represents uninhibited violence, sexuality, and physicality, and threatens all others’ “safety.” This definition should elicit the stereotypical “gangsta” rapper of the era spanning from N.W.A. to 50 Cent. The crucial—and profound—difference, of course, is that whereas “minstrelsy was a performance practice in which masculine power was denied to black males, hardcore rap performance represents an opposite extreme, where black masculinity is recuperated in an arena of affective representation and performance of the body.”

The imaginary “bad nigger” of white horror, then, takes on agency in the form of, to borrow from the description of O-Dog in 1993’s Menace to Society, “America’s worst nightmare. Young, black, and didn’t give a fuck.” The fact that as a thirteen-year-old I memorized large stretches of dialogue from this film supports White’s assessment that “hardcore rap music’s move from an insurgent black street music into the popular mainstream is illustrative of the fact that the more rap was packaged in terms of gun-toting gangstas the bigger its suburban audiences became.” My friends and I, watching Menace and listening to The Chronic repeatedly, were in perpetual danger of “reducing substance to simulacra—commodity without context.” We didn’t fully understand what we were participating in then, but looking back we can appreciate what White means when he writes,

The black body has typically been appropriated and deployed as a kind of discursive text that constitutes a web of cultural connotations inscribed with an array of possible meanings that are then (re)inscribed onto white bodies and performed in ways that signify powerful historical ideologies about blackness, gender, masculinity, and personal power—ideological articulations that are “used by . . . fans to construct identities that provide alternative representations of their real social experiences” (Grossberg quoted in White).

Any reader not prepared for sentences like the above is advised to stick to the kind of writing found in XXL. White does occasionally step out of full academic mode, though, to offer some levity:

Walking through a mall . . . I was stopped by a lighted display box featuring a life-sized mean-mugging photo of the West Coast hardcore rapper The Game, wearing his just-released signature sneakers. The cold hardness in the facial expression, something near to vicious, made me wonder why any middle-class white parents would actually buy their kids these shoes if their only reference point was the unsettling image of a snarling, tattooed black thug looking back at them. Then I realized the kids probably have their own credit cards.

White’s readings of rappers such as Run-DMC, Jay-Z, Eminem, and others are unlikely to bring new information to fans, but his analysis of Brother Ali, who serves as his prime example of a healthy and mature navigator of the dangerous racial waters of rap music, is full of insight. In his words:

Ali eschews the nihilistic caricature of the bad nigger in favor of the socially conscious and morally committed heroism of the bad man who lives not just for self, but for others in his community. Brother Ali’s performance of radical black subjectivity and black masculinity not only repudiates hundreds of years of condescending and paternalistic appropriations of black subjectivity, but challenges white consumers of black culture to seek more ethnical ways of engagement with black people and black life.

It’s a worthy endeavor White identifies in Ali—and one that White’s own work here serves to bolster as well as articulate.