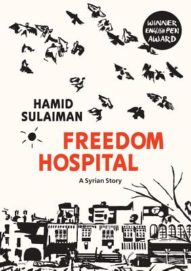 In the comics medium, the border between well-wrought artistry and political authenticity can be an uncomfortable one, as form and content tend to jockey for position. Because journalism requires an immediacy that comics cannot easily support given its visual gestation period, many questions arise: Is authenticity more important than artistry? Can these two pillars share command of a story? Why tell a political story this way at all?

Created over four years, Hamid Sulaiman’s ambitious book Freedom Hospital may suggest some answers. Set in Syria in 2012 amidst the tensions following the Arab Spring, this graphic novel tells the story of a secret hospital set up to help wounded protesters. Although the work is fictionalized, it’s clear that Sulaiman writes from first-hand experience; harrowing, honest, and politically embedded in a way that Western readers will find devastatingly illuminating, Freedom Hospital tells an important modern story in a fresh and unconventional format.

Yasmin, founder of Freedom Hospital, is joined by her friend Sophie, a documentary filmmaker. Together, while protesters continue to take to the streets and casualties increase daily, they try to save lives and chronicle the political evolution of the region. Tertiary characters fill out Freedom Hospital with curious vignettes, but an inpatient named Salem provides the requisite intrigue: suffering from memory loss, Salem’s origins (and allegiances) are slowly revealed during his year-long convalescence.

Sulaiman’s monochrome drawings showcase a blotchy chiaroscuro that feels like rotoscoped photography. His settings are strikingly rendered in beautiful, busy detail like a furiously carved woodcut. While his prose descends from the work of Joe Sacco, his illustration is more in line with creators like Chris Reynolds; Sulaiman is a master of light and shadow, tuned into the power of inky black fields. His pacing, too, is exceptional: while hyper-detailed panels establish drama, these backgrounds disappear as characters speak. His cast frequently monologues over blank backgrounds, a tactic that ultimately accentuates the words spoken—by leaving chains of speech bubbles to float in voids, Sulaiman quite literally gives these stories a space to be heard.

With such strong artistry, it’s unfortunate that the plot and characterization of Freedom Hospital is so thin. Sulaiman has a gift for vividly communicating the trauma of war, but outside of the realm of reportage, his characters seem wooden: friendships and romances grow at an unconvincing clip, and feel like unnecessary turns of plot when considered alongside the more journalistic elements of the novel.

As Freedom Hospital unfolds, its action speeds up to a convoluted fog. It becomes less important who says what or feels what feelings; what matters, broadly, is the content of what’s said and who survives. In one scene, a character explains to Salem that he could consider his memory loss a gift:

You don’t know your luck. . . . You lost all your memories, even the bad ones. You needn’t weep or worry about anyone. I lost my brother five months ago. I have four other brothers fighting. I don’t know where they are or if they’re still alive. My wife and daughter are displaced and I’ve lost all trace of them. These are memories I’d gladly do without.

A passage like this could be spoken by nearly any character in Freedom Hospital and the novel wouldn’t change. While this may be indicative of the region’s widespread conflict, it also reveals shortcomings in how Sulaiman tells his story. One wonders if Sulaiman would be better off working entirely in the realm of nonfiction and pulling away from the temptations of a narrative arc, so as to let his visually striking work focus on the stories he needs to tell.