Join us as writer and sound artist LaTasha N. Nevada Diggs presents poems, songs, and myths from her acclaimed debut book TwERK. Concerned with popular media and history, code switching and cultural inclusivity, the work in TwERK is as rooted in lyric as in innovation, in Black music as in macaronic satire—it asks only that we imagine America as it has always existed. Don't miss this explosive exploration of the English language, and all the wonders it holds! Co-presented by Rain Taxi Review of Books and the Walker Art Center. 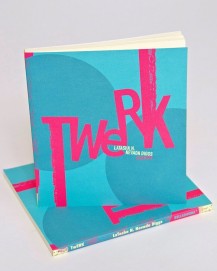 "Here it is: a dope jam of dictions; a remixed, multicultural, polyphonic dance of vocabularies; a language of high stakes, hi-jinx, and hybridity. TwERK is subversive, vulnerable, and volatile." —Terrance Hayes

"Tweaking parallel languages, rebooting and putting them to (hard, hard) work, TwERK's non-stop shimmy-shimmy embarks on an animé-iigjag idio-lingual-lectical booty-roll and doesn't come down until the break of dawn." —Maria Damon

"In her first major work, Diggs doesn't so much 'find' culture as she conjures up the new emerging happy peoples herein." —Rodrigo Toscano

In addition to TwERK, LaTasha N. Nevada Diggs is the author of three chapbooks and the album Televisíon. Her work has been published in journals such as Nocturnes, Ploughshares, Fence,The Black Scholar, and jubilat, and her interdisciplinary work has been featured at The Kitchen, Exit Art, MoMA, Brooklyn Museum, and The Whitney. As a vocalist, she has worked with the likes of Vernon Reid, Akilah Oliver, Mike Ladd, Edwin Torres, Elliot Sharp, DJ Logic, Vijay Iyer, and Ryuichi Sakamoto. As an independent curator, she has directed literary/musical/theatrical events at Symphony Space, Lincoln Center Out of Doors, The Schomburg Research Center for Black Culture, BAM Café, Dixon Place, and El Museo del Barrio. A native of Harlem, she is the co-founder (with writer Greg Tate) of yoYO/SO4 Magazine.

Back to Readings page