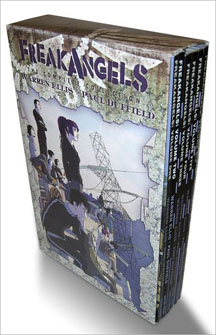 An extended meditation on power, adolescence, and community, Warren Ellis and Paul Duffield’s FreakAngels is thick with melancholy and fear. Sure, there are jokes—and sometimes they’re funny—but at its core, this is a psychic drama in the tradition of Charles Burns’s Black Hole and (as Ellis points out himself) J. G. Ballard’s various dystopic experiments.

The premise is simple, and is often repeated (the series ran as a weekly web-comic from 2008-2011, which often affects the pacing of the story): “Twenty-three years ago twelve strange children were born in England at exactly the same moment. Six years ago, the world ended. This is the story of what happened next.” Like much of Ellis’s other work (e.g., The Authority, Planetary), there is a heavy emphasis here on a group of intimates working out the varying degrees of love and hate they feel for each other as they try to tend to bigger problems.

Ellis has structured the plot of FreakAngels around the themes of growing up and playing with power. Even once the twelve kids reach adulthood, they still make stupid mistakes, act out of wrath or lust before kindness or love, and generally expect to be understood and taken care of—like most people, in other words, even “grown up” people who have kids of their own. In this respect, it’s a realistic look at a sad and sturdy fact of life: few people really ever do “grow up” at all. FreakAngels meditates on this, often with great horror.

The story is also concerned with broader themes of human development and evolution, and that’s where a lot of the science fiction comes in. These twelve “strange” people have psychic powers that, by the end of the sixth book, show them to be more than angels—more like atemporal gods. Even at the outset, their wild and undeveloped power “punches a hole” through England, creates tidal waves of space and time, and gives them each special proclivities and a general ability to push around mere mortals.

The complexity of FreakAngels lives in this last item: these kids have the power to make people do what they want. Sometimes this comes through as healing, as when the den mother, Sirkka, re-writes the memories of a rape victim. But she only had to do the healing because of the “special” treatment that Luke gave the girl. Luke and Mark, our consistent villains, constantly push folks around for sex and power; most of the other twelve spend their energies cleaning up after Luke and Mark and preparing for the increasing conflict that their desires bring to the community of Whitechapel and beyond.

What to do with such power? The choice the twelve cooperatively make at the end of the story does enough dramatic good to seal up the saga, though a few questions remain (not to mention a deep sense of mystery around the fundamental question: who are these people?), and there are points at which the villains act slightly out of character—as if the plot needed moving, so what the hell. These narrative weaknesses are mostly tied to the story’s original format as a weekly web comic (still online for free by the way), and are shared with many a work of serial graphic literature.

Still, FreakAngels spans genres with impressive dexterity. Sometimes it gets silly before veering back into psychological horror, and sometimes it gets mundane (in a very satisfying nuts-and-bolts manner: home brewing, steam engines, urban scavenging) before lurching into the cosmic. But if you’re up for such a ride, then ride this soap opera out. It’s not great literature (and some of Ellis’s other work certainly is), but it’s often fun to read and will eventually take you out of this world.