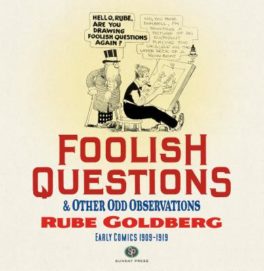 Even before he was celebrated internationally for his zany inventions, Reuben Lucius Goldberg churned out cartoons like a machine. He built his comics around a simple premise, typically a recurring punchline or structural gimmick. His 1912 cartoon I'm The Guy features repeated wordplay, with characters who "put the ale in Yale" and the "con in congress." The 1914 strip Old Man Alf of the Alphabet turns familiar acronyms inside out: in one cartoon, a poker I.O.U. is explained to actually mean "I'm Often Untruthful." Some strips were riddles, with literary titles hidden in silly scenes: "Next station is Ferno," a train conductor announces in one puzzle, while two passengers muse about how a friend named "Bill Dante" lives in town. "What does this awful mess represent?" the cartoon asks.

Between 1907 and 1938, Goldberg created over 100 different cartoons, and while many of them were short-lived, a few proved to have substantial staying power due to their delicate balance of social satire and relatable humor. From 1909 to the mid-1930s, Goldberg penned a single-panel comic called Foolish Questions that repeats the same sarcastically screwball shtick with each new iteration. Every cartoon depicts a person in the middle of particular task, interrupted by an onlooker who asks, stupidly, if they're doing exactly what it looks like they're doing. The interlocutor, naturally, receives a snappy reply. "Feeding the cat, Lemuel?" a man asks, as another man tends to his feline. "No, you herring, I'm biting the horns off a goat." Some can be quite sassy: "Going to school, Sonny?" a man asks as schoolboy tromps by. "No you simp," he replies, "I'm on my way to an undertaking parlor to meet a bunch of live ones." 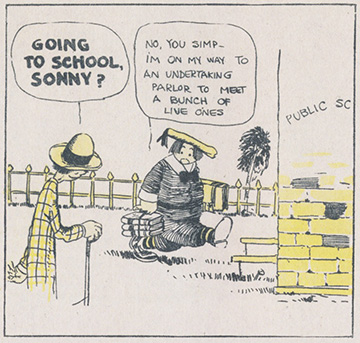 The formulaic nature of Foolish Questions allows little room for flourish, but Goldberg manages to capture the early 1900s in a vaudevillian shimmer and trades social niceties for some bite. In one cartoon, a major world event is brushed aside: "Oh, has the pole been discovered?" a man asks as another man reads the newspaper, its front page screaming reports of recent arctic exploration. "No, you rummy-this is an account of a dog fight in a frying pan."

Foolish Questions laid the groundwork for the machine drawings that would transform Goldberg into a household name. Goldberg realized through the strip that he could sink into a gag and let that machine run until its wheels fell off. His inventive chain reactions were absurdist, imaginative feats: one, for example, depicts a "Professor Butts" wearing his "Self-Operating Napkin," which connects his soup spoon to a headpiece carrying an alarm clock, a rocket, and an exotic bird, all of which would somehow lead to an automated face-wiping. By the 1920s, Goldberg was everywhere, from syndicated funny pages to progressive art magazines like Tristan Tzara's Dada. Today, his drawings and, more importantly, his influence, can be found in major art museums: much of Dada's mischief and the momentum of Futurism can be chained backwards to Goldberg's pen. Jean Tinguely's kinetic sculptures, for example, owe a mechanized tip of the hat to the cartoonist's pointed dreams of useless complexity.

Sunday Press's Foolish Questions & Other Odd Observations compiles over 250 of Goldberg's cartoons, including his complete Foolish Questions output for the Sunday Chicago Tribune from 1909-1910. To read them all in sequence is somewhere between mind-numbing, soothing, and positively transcendent. The book is beautifully produced, with the subtlest coloring that accentuates Goldberg's brilliant penstrokes and trailblazing lettering. But to have what is loosely the same joke repeated four times a page creates a bizarre new reading experience: the book's elegant presentation suggests there must be some way to unlock these gags and find some cohesive, metatextual glue between them all. Could there be repeated themes to the interchangeable variables of name, action, and put-down? Foolish Questions & Other Odd Observations feels like a riddle in itself, like there must be a code to crack their screwy simplicity.

In the end, we may not need to put the gold in Goldberg; these cartoons make as much sense as "playing auction pinochle with a musk ox", and that's perfectly alright. Left to their wacky inanity, they showcase a writer committing wholly to a simple goof, and that commitment alone boasts a marvelous sort of artistry. Perhaps it is because these gags do not transcend into something larger that makes them so special. While they may risk oversaturation and feel at times repetitive, they hold a remarkable mirror to the wonderful ridiculousness of daily life, reminding us that even when we have nothing to say we find a way to say it, day after day.