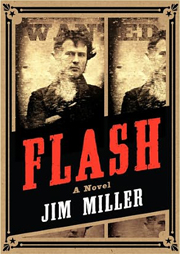 Who are the Wobblies? If you know, if you care, then Jim Miller’s novel Flash may light a spark inside you, driving you deeper into the realm of hellish history heaven. And if you are not familiar with the Wobblies and the Industrial Workers of the World, be prepared for an exciting excursion into the early 1900s and some dark and essential knowledge of America’s brutal West Coast labor history movement.

Miller is a professor of American Labor Movements at San Diego City College, and his love for these topics is evident. Flash chronicles reporter Jack Wilson’s discovery of, and fascination with, an old wanted poster in a San Diego library’s archives. Who was Bobby Flash? The face and the “defiant half smile” on the poster haunt Wilson:

What drew me to him? Perhaps it was the vague stories about my “crazy commie great grandfather” that my mom would toss off when she was assailing my father’s side of the family. They had always resonated with me—just not in the way she had intended. And, perhaps it was just a flight of fancy, but I thought Flash looked a bit like my son Hank thrust back in time (minus the gold tooth). OK. Enough already. Maybe it was just the name, Flash.

Wilson soon becomes involved in a search for Bobby Flash, a revolutionary Wobbly and labor leader. The novel jumps time, detailing the ageless human struggle for justice at its best, while hammering home the lessons that continually need to be learned and relearned. Always the same story, it is at once hopeful and positive and timely, even as it forever plays out in reruns. “We’re all just humans and the divisions between us have all been created to serve the interests of those at the top who benefit from a divided working class.”

This book delves into personal relationships, misunderstandings, blood ties, and the age-old quest for love and finding one’s place in the world. As Wilson gets historically and psychologically involved with the enigmatic and well-named Bobby Flash, readers see similarities in the two men’s lives—in reflections and similarities, as well as screams and warnings from generation to generation. In addition, through Wilson, readers are taken on a trip through some more recent California history: “A Raiders game is like a Dead show with carne asada instead of veggie burritos, beer instead of acid, and, of course, bloodlust for football rather than psychedelic music.”

Flash tries so hard to be loved. It is earnest; it pleads in a way, to listen to its message. Besides just labor history, we get a taste of Whitman and Thoreau and their political leanings at the time. And yet, how does an author make readers believe and care? How does a writer move from telling a stacked bunch of facts to placing real characters into a spellbinding story? In the current American political environment, labor rights are in the forefront; a book like Flash could not be more on point. And yet there is a feeling of being lectured to that cannot be shaken.

For lovers of American history, California history in particular, this book could be a dream come true. While Flash may have less than perfect prose, it delivers a tell-all account of America’s brutal labor past for readers who are interested in a serious and crucial history lesson, and who can be forgiving of its form—historical facts valiantly in search of a novel.