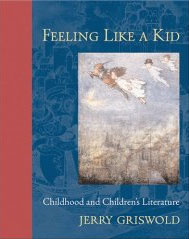 “It is striking,” writes Jerry Griswold in his in-depth inspection of children’s literature, Feeling like a Kid, “how often growing up in children’s literature means looking down and be-littling.” Griswold, then, is child-like at heart, letting none of his years nor any part of his academic nature interfere with his frank admiration of children’s literature. Feeling like a Kid is written in the crisp, bright manner of a yet-to-be disillusioned graduate student happening upon an exciting new subject for the first time, combined with the sage irony and impeccable background of a full-fledged academic expert that one would expect from an author who is the director of the National Center for the Study of Children’s Literature.

Griswold explores children’s literature through five key themes: snugness, scariness, smallness, lightness, and aliveness. Each of these tropes exhibits a certain appeal to young people and simultaneously guides adults in understanding the psyche of children. As Griswold says, “the great writers for children know—and their stories speak of and reveal—what it feels like to be a kid.” Griswold deftly references a virtual smorgasbord of classic children’s literature in his quest; he stumbles, however, in that the vast majority of the books he explores are quite old-fashioned. This is not to say there is no merit in older works. In fact, books such as Kenneth Grahame’s The Wind in the Willows or George MacDonald’s The Light Princess, too little known to this generation of readers, are delightful inclusions. Where Griswold reveals his weakness is in the decided lack of comparable titles from contemporary authors and his inclusion, instead, of so-called "blockbuster" children’s books such as the Harry Potter series.

This omission of pertinent contemporary works of children’s literature is troubling. Griswold indicates his assumption that even if he is able to remain in touch with his inner child, his audience is made up of those who have grown up to look down upon contemporary kids’ books, concerning themselves only with the children’s literature written when they themselves were children. For example, the captivating 1971 novel Mrs. Frisby and the Rats of NIMH is only mentioned in passing—and, horrifyingly, only by the title of the movie based upon the book, in a list of children’s movies in which the phenomenon of Smallness is present. Similarly, the mysterious and intriguing animal daemons found in the universe of Philip Pullman’s His Dark Materials trilogy would be impeccable additions to Griswold’s assertions regarding Aliveness, but are overlooked for more traditional examples, like the animals of Aesop’s fables.

Of course, one book cannot be exhaustive in such a broad and varied field without becoming superficial, and Feeling like a Kid is anything but superficial. It is rather an adept and engaging blend of scholarly analysis and genuine passion and regard for the value of children’s literature.