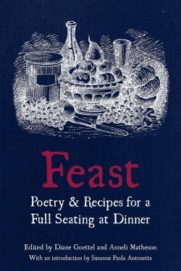 An ancient Greek philosopher recommended that a host giving a dinner party should avoid reading his poetry to his guests. If he were still around to read the anthology Feast: Poetry & Recipes for a Full Seating at Dinner, he might reconsider. Brimming with delicious recipes and poetry to match, Feast is magnificently nourishing. Like a meal (or a menu), the anthology is laid out in proper order: Starters, Sides and Sauces; Cocktails; Mains; and Dessert. Each of the poets—all of them contemporary, and many of them award-winning—contributed a recipe and a poem; two of the recipes are poems themselves. And just as the recipes come from, or are inspired by, various countries or regions of the world, the poems give us a glimpse into the various regions of the world of the human spirit.

Some of the poems, like “Here’s to My Mother Making Herring Under a Fur Coat” by Yelizaveta P. Renfro pair food with memory—though at times the memory evoked is one of scarcity rather than the abundance the book celebrates. This is true of both Renfro’s poem and “Eat Stone and Go On” by Joe Wilkins, which is paired with his recipe for soda bread:

Isn’t it a shame, my grandmother said,
silver fork in her shivering fist,

How we have to go on eating?

Even if it was only
soda bread and fried steaks, I see now

it was something. I shoveled
another forkful of buttered potato

into my mouth, bits of the stone
we call salt between my teeth.

Karen Greenbaum-Maya instructs us in a Zen-like calm and acceptance in “Eggs Satori”:

If curds break into pieces, you are working too hard.
You have been dragged off-center.
Stop. Get over yourself.
Let the eggs cook alone for a moment.
Honor how little they require from you.

Hers is a dish to be enjoyed mindfully: “Eat your egg in small voluptuous bites. Do not speak.” Contrast this with Matthew Gavin Frank’s recipe, Tajarin with Savoy Cabbage, Mushroom, Hazelnut and Sage butter, which ends with the liberating instruction: “Eat noisily.”
Other poems pair the preparation of sustenance with love in its endless forms. In Kevin Pilkington’s “Eating a Herd of Reindeer,” the poet watches his wife engaged in a labor of love: baking holiday cookies that “she will place in tins / and send to family and friends.” As he observes her at her work, he reflects upon the blessings of his life as reflected in the cookies she is preparing, “a world / that is as warm as a favorite old sweater / with holes in its elbows.”

The final page of Feast invites readers to host a party of their own with a recipe or two from the anthology, and share the event with “fellow readers and eaters” on its Facebook page. One can envision a sequel to Feast with recipes and poems contributed by devoted readers of the anthology—and that might be another delicious gathering.