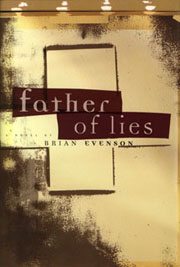 In Father of Lies, a pederast provost in a religious order called The Corporation of the Blood of the Lamb-which closely resembles the Mormon Church-literally gets away with murder. It's a strongly felt, angry book, which condemns the church for its cowardly closing-in of the ranks when the provost, named Eldon Fochs, is accused of molesting a congregant's son.

Evenson's use of multiple viewpoints is skillful. The book offers three very different views of Fochs, his actions, and their consequences: an exchange of letters between the church elders and Fochs's psychiatrist,
Alexander Feshtig; Feshtig's case notes documenting his growing suspicion
that Fochs's fantasies are more than just that; and Fochs's own words.
The contrast between these vastly different modes of experience adds to
the tension of the story, as Fochs's actions become more and more extreme.

Fochs is one of the more disturbing characters I've encountered in recent
fiction, and Evenson renders him almost entirely unsympathetic. Early abuse
is touched on, as is a head injury, to suggest that psycho-neurological
damage could be partly responsible for his violence, but otherwise, the
provost's motivations remain unexamined. And despite Fochs's minor struggles
with his rudimentary conscience, for the most part he pursues his pleasures
with unadulterated lust. His doublethink justifications-a provost is a
church elder, church elders are by definition good, therefore his actions
must be good-ring a bit simplistic, but unfortunately may be true to type.
Through Fochs's narrations, Evenson creates vivid hallucinatory effects,
making it difficult for the reader to distinguish what seem like disturbed
apparitions from actual spirits with supernormal powers.

The struggle between faith and reason is a major subtext in this novel, but could have stood more examination. Feshtig has accepted a position as director of a church-sponsored mental health facility and appears to have resolved any problems he may have had reconciling his religious faith with the secular practice of psychiatry. But the elders expect that he will put his faith in God's anointed representatives before his responsibilities as a doctor-responsibilities like client confidentiality. Particularly discomforting are the entirely believable responses of the elders when forced to address accusations against Fochs; their decision to place their faith in the provost leads them to take action against the mothers who come forward to accuse him.

Evenson himself is a member of the Church of Jesus Christ of Latter-Day-Saints. He once taught at Brigham Young University, but he resigned in the aftermath of a much-publicized dispute about academic freedom and is now a professor of creative writing at Oklahoma State University. It doesn't seem too far-fetched to think that the character of Alexander Feshtig may have had his roots in Evenson's own wrangling with church elders, over-involved in matters outside their expertise.

Ultimately, Evenson seems more interested in the how's than the why's, as he explores the way a violent mind operates, causing those in responsibility to stand by as their representative rapidly spins out of control. Despite its failure to discuss its characters' motivations, Father of Lies is an absorbing read, and one that has stuck with me. Those interested in violence and its consequences will find much to ponder here.