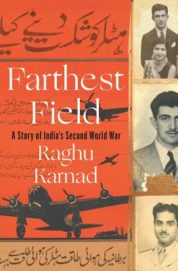 For some years during the Second World War, my paternal grandfather, a mid-level employee of the Survey of India, worked in Baghdad. This anomaly—to the best of my knowledge, he never left South India for the rest of his life—had awakened little wonder in me, perhaps because my father’s family is not especially communicative. Besides, my grandfather’s much longer-lived reality—he returned to his wife and children, worked, retired, and then died in ripe old age, all without saying much about Baghdad—made his actual stint there seem not just unglamorous but uninteresting.

Raghu Karnad’s astonishing history, Farthest Field: An Indian Story of the Second World War, casts the Indians like my grandfather who served the British Empire in Iraq during World War II in a far more prestigious role. They were members of the so called “Paiforce” (the Persia and Iraq Force), tens of thousands of whom (soldiers, military officers, bureaucrats, cooks, police, mapmakers, surveyors, you name it) were relocated to a sprawling bureaucratic occupation of Iraq. Perennially beleaguered Iraq was to serve as “the final link in a supply chain” freighted with American war supplies bound for Stalingrad, a chain which “kept the Red Army on its feet.”

Fast-paced and sweeping, Farthest Field is a study of the Indian landscape—with a sharper focus on Indians in uniform—during the war years. India was the “principal base for Britain’s war against the Japanese, not to mention the United States’ campaign to aid China.” Indian troops delivered for the Allies one of their first victories of the war in the beginning of 1941, and were among the first to contest Rommel’s charge across North Africa. Farthest Field amounts to an eloquent, and essential, reclamation of the Indian contribution to the Allied war effort. Karnad brings to his project an infectious sense of wonder, and (going by his other writings on the topic in the mainstream media) a crusader’s zeal. The crusade is against the Indian state, which, like most states, likes to keep its history simple: only those who were fighting against the British Empire in the 1940s can be tolerated as heroes by the Indian state. These Indians of World War II are lost “between the closing chapter of imperial history and the first volume of the national record.”

Among these forgotten Indians were three of Karnad’s ancestors, and Farthest Field is narrated as the story of three young men—“three brothers-in-law turned brothers-in-arms”—who were officers in “the largest volunteer force the world had ever known.” One of them was Karnad’s grandfather. All three perished in uniform, though not on the battlefield. Only one of the three is satisfyingly studied: Bobby Mugaseth, scion of a wealthy Parsi family whose motivations for joining the army seem to have been hero-worship of his brother-in-law and postponement of the responsibilities of taking over the family business from an oppressively traditional father. Karnad does not embellish these abbreviated careers with speculative acts of valor or heroic purpose, and yet—such is the elegance and imagination of his prose—any ancestor would be proud of being commemorated in such style.

Karnad is gifted in his ability to digest entire battle scenes, cultures, or mind-sets into a phrase or a sentence. The Parsis were “sporting in business and businesslike at sport.” The British army “opened the roads from Kohima (on the Indo-Burmese border, against deeply entrenched Japanese forces) like roots open stone, slowly, and with an anguish inaudible to the rest of the world.” The Iyengar Brahmins were “past masters at reincarnating ancient privilege in the form of modern success.” A young man who had dared to breach the rigid endogamy of his community was “cut off” like “a limb infected by romantic insolence.”

The one glaring weakness—and one which gnaws as much on the reader as on the credibility of the very premise of Farthest Field—stems from the essential nature of its protagonist, Bobby Mugaseth. Bobby’s tiny community of Indian Parsis were, arguably, the most anglophile, devoted, and trusted subjects of the British Empire, and Bobby’s early life reflects that. Just past his college years (where he was a reveler at “brandy evenings and gramophone nights”), on the sea journey to Iraq from Bombay on a multi-decked transport ship, he is finicky like an Englishman: he “could tell from just the odorous air” which deck was Hindu, which Muslim and which British. After months of training, he is excited about finally “taking it to the Boche.” His best language is English and he gravitates to friendship with fellow British officers with whom he reminisces about the beddable women back at their training station. To a hypothetical English officer with racial feelings (from the litany of gross imperial attitudes that Karnad lists, such Englishmen were surely abundant in the British-Indian army), Bobby Mugaseth must have seemed (to quote Edward Said) “an ontologically funny native, hopelessly trying to be like ‘us.’”

Even as Farthest Field cleaves adhesively to its “Indian Story” (at each World War II battlefield reallocating credit for Allied successes), it seems to abrade that effort by its portrayal of Bobby Mugaseth as more English than Indian. Even Bobby’s immediate kin seem to share this opinion. “[Bobby’s] face was drawn and dark, suddenly like an Indian’s” (my italics)—this is the thought that flashes through his sister’s mind as she mourns over his last photograph, taken after the ravages of war had begun to show on his face. It doesn’t discredit the narrative as much as disorients it. The descendants of the tens of thousands of Indians who served the war effort might, like myself, find little to improve their orientation regarding those confusing times. The chapter on the Indian occupation of Iraq (which promised revelations about my grandfather’s experience) is grandiosely titled “Kings of Persia.” But if a reader has a possibly clichéd idea about how large groups of Indians live when relocated for work to an alien setting, then, disappointingly, Karnad gives the reader little about that period in Iraq that will challenge that cliché.

Novels, according to Novalis’s famous quote, “arise out of the shortcomings of history.” In the case of a writer of Karnad’s evocative powers, it is a formulation that, regrettably, often comes to mind after being first planted there by his stated intention of divining the “interior lives” of his three ancestors by using “fragmented evidence and testimony to build an account of their thoughts and beliefs.” The “interior life” of Bobby Mugaseth is a case in point. “Bobby scanned,” “Bobby felt,” “Bobby’s heart sank”—we are taken so close to him, much closer than one expects to go in a work of nonfiction, that he begins to feel like a character in a novel. I even came to believe that some of the paragraphs might originally have been written for a novel. But that kind of scrutiny only reveals other defects. For instance, the large gap between the abundant joie de vivre with which Karnad imbues Bobby’s pre-war attitude and the moribund desperation associated with his mysterious and tragic death—a gap that is tailor-made for a purely fictional treatment—is hardly intelligible in Farthest Field.

Other scenes in Farthest Field might bring Novalis to mind as well—like the few pages that sketch the journey of Karnad’s grandparents through the mud forts of the Empire’s dangerous Afghan border. He is a junior commissioned officer. She is pregnant. They are yet unmarried. Both their families are rabidly against the union. He is sick with the Asthma that will soon kill him. By regulation she can be by his side only as the guest of a sympathetic senior officer. In situations like this a reader might wish that Karnad’s supple prose had been applied instead to fiction.

Farthest Field is most satisfying as a coming-of-age book; in that incarnation it is a welcome addition to the history of a period which has been too closely tied, on the one hand, to pieties like “the freedom struggle” and Gandhian asceticism, and on the other, to barbarisms like the bloodbath of partition. One can hope that young Indians approach this history in that spirit, because at its core, this is the story of young people, quite like themselves, trying to lead secular and modern lives, with the puckered lips and raised eyebrows of Indian tradition glowering all around.