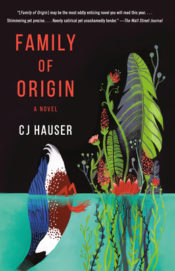 In Family of Origin, C.J. Hauser’s wistful second novel, a family’s troubled past—and their attempts to reckon with it—provide a frame for much larger questions around fighting inevitable failures, the long shadow of parental rejection, and the looming climate catastrophe. It’s a story about losing your way and keeping the faith, and while some of the book’s formal flourishes don’t always land, its wit and big-hearted approach to contemporary dilemmas make it a welcome addition to the growing body of American climate fiction.

Hauser’s first novel, The From-Aways, was set in a small coastal town in Maine, and Family of Origin similarly begins where shipwrecked land-dwellers find themselves coexisting with the sea’s enduring mysteries. Adult half-siblings Elsa and Nolan Grey journey to Leap’s Island off Florida’s Gulf Coast, where their father Ian, a once-renowned biologist, has recently drowned. Nolan has asked Elsa to accompany him, but the Greys are estranged—one obvious reason for their estrangement becomes evident early on, but their time on Leap’s Island with their father’s former colleagues gives this estrangement ever-unfolding depth and dimension. Ostensibly the siblings have come to collect their father’s belongings and settle his affairs, but the question of his suicide leads them to what forms much of the novel’s structure: conversations with the other people on Leap’s Island, an eccentric group of scientists and writers and seekers who call themselves “Reversalists.”

The Reversalists believe evolution has begun running backwards, a preoccupation that tidily reflects the Greys’ own suspicion that they have veered off their course toward happy, well-adjusted adulthoods: “Whatever inner thing guided normal people in their choices—a diviner’s stick in the ribs, a magnet of the hips, a compass of the skull—Elsa’s was broken.” Elsa and Nolan find the Reversalist’s work preposterous, particularly because it’s based on observations of undowny buffleheads, a species of duck that flutters and floats around Leap’s Island. Their late father’s dedication to studying the buffleheads, though, means the Greys also try to understand their intrigue. It’s a charming, oddball development, and Hauser rightfully teases out all its provocative implications for time’s slippery nature and the politically dangerous way that we can idealize the past. Also among Family of Origin’s many strengths is that the Reversalists’ logic is always convincing enough to create real emotional resonance. As Elsa and Nolan interview the Reversalists about their emotionally distant father, someone seemingly “too rational for suicide,” the reader quickly realizes that they are also looking for an explanation—and a new language, really—for their own personal shortcomings.

The Greys are self-loathing creations, understandably mired in millennial ennui as they both flirt with nihilism. Initially, the scope of Elsa’s angst seems broader than Nolan’s lingering troubles: while he is mostly consumed with the self-diagnosed meaninglessness of his romantic partnerships and professional endeavors, Elsa sees no hope for the planet’s future and has turned her attention to flying to Mars—literally. The half-siblings have a complicated relationship even to their own estrangement, arguing about a shared history and issues that were “never resolved because they were always finding the rot in different apples.” They are both acutely aware of existential issues plaguing their worlds—climate change as well as the consequences of unbridled capitalism and an unregulated internet—but have very different approaches to dealing with these issues. A teacher who believes “her job had started to feel like lying,” Elsa looks to a citizen-manned Mars mission for healing: “This is why she had to go to Mars. She couldn’t bear to look over her shoulder and see one more sad, wounded bird laid out behind her.” Nolan reads more as a typical white millennial liberal, overwhelmed by the world’s problems but lacking any real initiative to face them given the potential for failure: “Nolan thought perhaps there was a quiet dignity in doing nothing rather than doing something well-intentioned but stupid.”

In their time on Leap’s Island, though, Elsa returns her attention to earth with Nolan’s help; together, they find ways to articulate their grief for their father as well as their deep frustrations with themselves. They grapple with complicity and practice vulnerability. They spend quality time observing ducks. They do what we all hope to do at some point, which is the deeply uncomfortable work of getting over ourselves. Hauser shoots off some formal fireworks later in the novel, a lyrical section about Leap’s Island’s history that feels undercooked next to the author’s no-nonsense but nonetheless complex characterizations, but the novel still hits, regardless. In fact, Family of Origin’s ending feels like a productive throat clearing, a transitional moment that sees its characters set down their own individual narratives in the hopes of writing a better ending for our collective one. As Hauser puts it near the book’s end, “if she could untether herself from what seemed inevitable, from her own inevitability, maybe Elsa would find other possibilities. Surprise herself. Maybe there was a difference between ignorance and forgetting. Maybe the past was no reason not to do anything at all.”