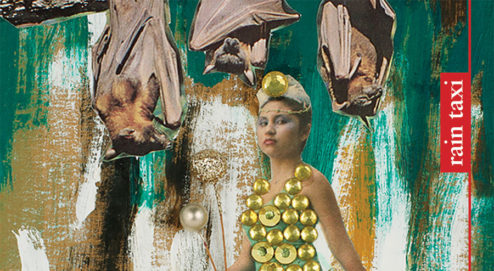 Small, Light, Portable Universes: An Interview with Richard Powers
Richard Powers discusses his latest novel, Bewilderment: an amazing journey that has in-and-out of this world experiences and shows the boundless love that a father has for his son. Interviewed by Allan Vorda

The Unending Beauty of the Longpoem: A Conversation with T Thilleman
Read along as we catch up with publisher and author T Thilleman, a man who has long stood at the crossroads of innovative poetry, about his new long poem opus three markations to ward her figure and more. Interviewed by Andrew Mossin

Two Adjunct Novels
Two recent novels, Lynn Steger Strong's Want and Christine Smallwood’s The Life of the Mind, add to the growing micro-genre about what many call "adjunct hell." Reviewed by Julia Stein

“Instants of Elation”: Recent Philosophy for the Masses
Enjoy a survey of several recent books that are rife with potential stimulation for the follower of philosophy for the masses. Essay by John Toren

Permafrost
Eva Baltasar
In a voice simultaneously raucous and icy with end-of-life clarity, the narrator of Catalan writer Eva Baltasar’s Permafrost lays bare the many women her life has contained, poetically detailing profound and urgent thrills. Reviewed by Jenny Apostol

In Concrete
Anne Garréta, trans. Emma Ramadan
By turns straightforward and outlandish, scatological and impish, plot is the least promising feature of Oulipian Anne Garréta’s latest novel to be translated into English. Reviewed by Jeff Bursey

CURB
Divya Victor
In her fifth book, CURB, Divya Victor builds a powerful exposition through poetry from both personal reflection and its refraction through the external world. Reviewed by Greg Bem

études
Friederike Mayröcker, trans. Donna Stonecipher
This collection of prose poems shows why Friederike Mayröcker, long celebrated in the German-language world as a daring voice of the postwar period and a passionate participant in the avant-garde tradition, remains worth reading. Reviewed by Walter Holland

Sonnet(s)
Ulises Carrión
In Sonnet(s), early work by conceptual artist and thinker Ulises Carrión shows how he built expansive notions of what a “bookwork” could become. Reviewed by Michael Workman

Somebody Else Sold the World
Adrian Matejka
Showcasing the poet’s command of form and music, Adrian Matejka’s fifth collection plays with complex and far-reaching concepts like violence and antagonism. Reviewed by Tryn Brown

Kathmandu
Anuja Ghimire
Anuja Ghimire’s Kathmandu will transport you to Nepal—as an interrogation of home and the languages we use to define it. Reviewed by Carlos A. Pittella

Embodied
Ed. Wendy and Tyler Chin-Tanner
Discover a comics anthology whose marriage of forms exemplifies the power of poetry and artistic interpretation. Reviewed by Linda Stack-Nelson