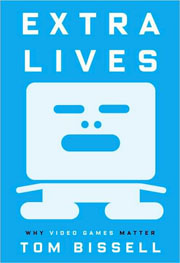 Tom Bissell is sure that his yet “entirely hypothetical” children Kermit and Hussein will one day ask him where he was and what he was doing when the United States elected its first black president; at least for now, he promises to confess he was “wandering an ICBM-denuded wasteland, nervously monitoring his radiation level, armed only with a baseball bat, a 10mm pistol, and six rounds of ammunition.” If pressed, Bissell might quip about the game-changing necessity of his seven-hour hunt for “a vicious gang of mohawked marauders who were 100 percent bad news and totally had to be dealt with”; he may also direct them to his fourth book, Extra Lives: Why Video Games Matter, which opens with a (recurring) meditation on how to deal with the unspoken politics of Kermit and Hussein’s significantly hypothetical question. If from videogames grow “actual experiences, many of which are as important to me as any real memories,” how do you cope with the demands they place on the “real-life line of intellectual or moral obligation,” or the reality that in virtual worlds, the narrative equivalents of historic elections are always around the next curve of the bombed-out road?

That Bissell begins his revealing exploration of videogame content, design, and appeal by way of this playfully shameful admission stresses the great ambivalence with which he addresses the medium—and the personal connection he feels toward it; he sees video games re-writing the ways we consume popular narrative with formal and interactive intelligence beset by storytelling best washed down with “a gallon of aesthetic Pepto.” A serious and productive writer turned serious and counter-productive gamer, Bissell finds himself, though appalled by much of videogames’ retrograde writing, compelled to sink hundreds of hours per year into playing the latest “commercially ascendant” action/rpg console titles. “The pleasures of literary connection [now] seem leftover and familiar,” he confesses, at least in comparison to the “surreally intense feelings of attachment and projection” that some games command.

Extra Lives is bookended by chapters in which we discover that play—from the solitary wastelands ofFallout 3 to the sandbox anonymity afforded by the streets of GTA4’s Liberty City—has indeed broken fresh ground with which to challenge his restless curiosity. At the same time, Bissell is conflicted about whether he has best spent his award-winning talents earning Extra Lives, spinning a blend of “digital travelogue” and gaming memoir from the demands of balancing an addict’s yen for the visceral, imaginative potential of immersive videogame play with a critic’s disappointment with the virtual worlds that draw our attention from real, passing life. For example, while describing how Fallout’s “profound stylishness, sophistication, and intelligence” fails to cover for its “tofu drama” storytelling redundancies, Bissell begrudgingly admits to passing up chances to rendezvous with other artists while reclusively playing his way through literary fellowships and assignments in Rome and Estonia.

Yet his missed connections seem to have paid off: Extra Lives is a special book. Built of the same reflexive honesty Bissell used to great effect in his previous hybrid-memoir, The Father of All Things, and rendered with intelligent, charming prose, it creates in the vast no-man’s land of literary-critical game studies a lonesome refuge for sharp, mainstream analysis that, combined with an un-ironic love of gaming, has made something of a buoying splash amid a cultural criticism of videogames whose commentators often-as-not feel like they’re writing their “legac[ies] in water.”

Extra Lives is raising eyebrows in part thanks to Bissell’s preference for writing with critical—but rarely ironic—distance about the medium with which he is consumed. This isn’t David Foster Wallace’s narrator sent all athwart personal interest to state fairs and adult video award ceremonies, or N. Katherine Hayles highlighting the progressive aesthetics of electronic lit. It’s not games journalism bound to review scores and corporate interests, or Espen Aarseth divining structural forms of ergodic narrative progession. Extra Lives is “one man’s opinions and thoughts on what playing games feels like, why he plays them, and the questions they make him think about.”

Thankfully, Bissell takes care to bring the rest of us along for the ride, aware that wandering too far, too alone, into the “electrifying solitude of [his] mind at play in an anarchic digital world,” will leave non-gaming readers confused at best, bored at worst. Through loosely-cohered chapter-pieces of travelogue and reportage, Bissell provides instructive remediations of the games he has played, converting the experience of their sights and sounds, narrative structures, and design principles into highly-readable accounts of playing Resident Evil in his folks’ basement, attending interactive conferences, and interviewing some of the industry’s most respected developers. That Bissell ends the project without answering exactly how much videogames matter—they are not, more and less hypothetically speaking, worth missing landmark acceptance speeches for—is less important than his guidance through why they matter, how they make us live with persistent, “fictional consequences” that complicate real-life commitments, and what the inescapable influence of their ascendant medium will mean to storytelling for generations to come.