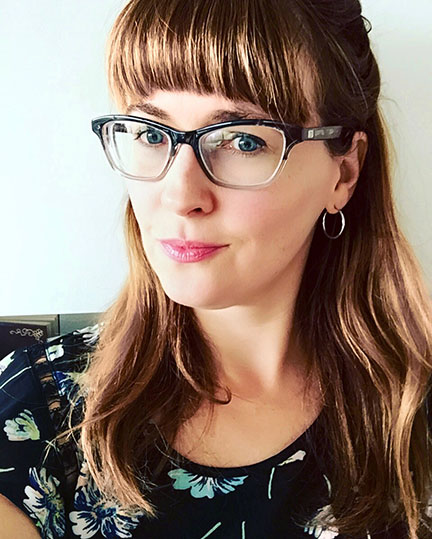 Lina ramona Vitkauskas is a Chicago poet from an Eastern European background. Though her poems derive from the Midwest, where she grew up and was educated, her sensibility is inspired by Surrealism (both French and Eastern European), contemporary American poetry, and those stories of resistance that originate in the former Soviet colonies that are now part of the European Union, including Estonia and Lithuania, the latter from where her own family comes.

In a prose introduction to her new poetry book, White Stockings (White Hole Press, $12), Vitkauskas writes: “During the Chechen Wars, stories began to circulate about certain snipers—blonde-haired, blue-eyed, cold-blooded female snipers called beliye kolgotki by the Russians. The White Tights (or White Stockings) so named because they were said to only wear white, were rumored to be contract killers paid by the Chechens on a kill-by-kill basis. They were supposedly paid to aim not for their targets’ heads—but for their genitals.” No proof of their existence ever surfaced, but the White Stockings became part of Russian combat folklore—a fitting antidote to a culture so hyper-masculine as Putin’s Russia. Vitkauskas does not expound upon this legend in a linear fashion but rather as a poet, running variations on the theme. Her poems are a kind of shamanic chant, evoking these female spirits.

Michael Stephens: Tell us how you came to write White Stockings, and why? 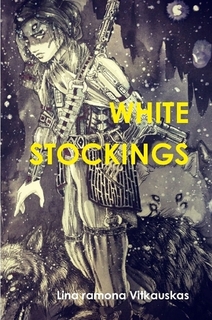 Lina Vitkauskas: This chapbook was inspired by a Russian-created myth from the time of the Chechen Wars. Russian soldiers had spread rumors that Baltic women trained to be snipers lurked in the deep forests of Chechnya, helping guerilla fighters by assassinating Russian soldiers. I was following the Ukrainian conflict in the news throughout 2013 and 2014, and I uncovered some stories about these women; I began to find that a few legitimate news sources had reported on them, specifically on the ongoing debate of their existence.

As a first-generation Lithuanian-American my thoughts were—and are—with the Ukrainian people fighting for their right to remain autonomous. After Russia’s illegitimate annexation of Crimea, it became clear: Putin was on a nostalgic path from his KGB days, wanting to fuse the USSR back together by taking what does not belong to him. The Baltics have “seen this movie” before, and it does not end well, so leaders in the region raised warnings early on, before the conflict, that soft power had become prevalent throughout the Baltics. These countries have since called for increased NATO presence, as they feel threatened.

I wanted to tell the story of these fictitious women through poetry and Lithuanian folklore; I wanted to inhabit them to understand the mindset of the lone, female assassin. I’m not drawn to violence; I’m drawn to the concepts of justice and defending one’s freedom, of heritage, and of narrow-minded world views versus expansive, communal views of seeing the world. The sniper scope seemed to be fitting metaphor.

MS: How does White Stockings relate to your other publications?

LV: Prior to White Stockings, I’d written about five poetry books and/or chapbooks. In my work, I tend to circulate around themes somewhat, but my first book, The Range Of Your Amazing Nothing (Ravenna Press, 2010), is strictly a collection of various poems from 1999-2005.

Failed Star Spawns Planet/Star (dancing girl press, 2006) blended my fascination with astronomy and autobiography…it namely serves as a moment in universal time—it is me, questioning my existence within the universe (doesn’t all poetry?).

In A Neon Tryst (Shearsman Books, 2013), I used ekphrasis to dissect films. I love films, and, very often, I tend to think in short films in my head, so this work meant a lot to me. I wrote it over the course of many evenings, just freezing scenes or silencing the sound, playing a variety of music over scenes. It was a way to inhabit the role of director, and address a few films I find important.

Spiny Retinas (Mutable Sound, 2014) was an ambitious experiment, influenced by pop culture and indirectly addressing rape culture. It was a statement on misogyny in some ways, and in others, it was an experiment in format and language.

Honey Is A She (Plastique Press, 2012) was my take on a divorce, using colony-collapse disorder as my guiding metaphor throughout.

White Stockings is topical, it addresses a conflict I feel strongly about, yet it incorporates facets of the other books, specifically identity (gender and culture), myth, folklore, global community, existence.

MS: What does it mean for you to be a Lithuanian-American, and does it have any effect on how you write?

LV: I think Lithuanians are inherently suspicious, and therefore we question things constantly. Much of this comes from a historic place, constant occupation and oppression, and therefore, there lies an undercurrent of instability. There is a deep connection to the idea that all things are temporary and uncertain—very Buddhist, in my opinion. Yet, there is also a deep sorrow felt there, for the many lives lost throughout the centuries fighting to sustain identity. There is also a swelling sense of national pride. Lithuanian is the oldest living language closest to Sanskrit; we are survivors, found ways to preserve language and culture against all odds.

There is a tremendous confusion when I look to my American side. Deep within me, genetically coded, lives quiet, patient fatalism, and the optimistic American part cannot reconcile with it. Dark comedy often comes this place. It has a deep impact on how I think and therefore write—everything to me is beautiful and absurd simultaneously, real and unreal.

MS: What is the difference for you between prose and poetry, especially as it relates to a subject such as Russian aggression in Eastern Europe?

LV: Russians, of course, are natural storytellers. Some of the best prose writers in the world, of course, are Russian. They craft stories beautifully; they unpack miles of detail expertly. I think because suffering is innate to Lithuanian existence, it is inevitable we have a poetic soul as a people. We began, for example, as a peaceful, pagan people under the watchful eyes of vengeful sea and sky gods, as well as malicious nymphs and dwarves attempting to teach us “life lessons.” And I believe suffering is intrinsic to poetry. Poetry is a form of expression that is natural to our people; we are Indo-European, not Slavic, so the tradition of compact word, sound, and image perhaps comes more freely.

MS: Tell us a little bit about your influences, and why they influence you so much.

LV: My background, of course. There is something embedded in our culture, I think, that spawns great attraction to creating and coveting secrets. So secrecy is a big influence. I sometimes like to think of poetry as a coded language. Lithuanians often had to bury or hide their true intentions through coded writings during Soviet times. So that resonates with me.

The Surrealists, George Maciunas (Fluxus), and film (Godard, Jodorowsky, Fellini) all influence my work. I admire the forms of documentary and experimental particularly. I love the truth and nakedness of humanity explored in documentary, but I’m also drawn to the idea of creating stunning visual worlds, and therefore new realities. Two films that leap to mind are Tree of Life (Malick) and The Fall (Tarsem). I also love absurd premises that unfurl into comedic tragedy. I just saw The Lobster, probably one of the best films I’ve seen in awhile. 8 ½ and Fando y Lis are two of my favorite films.

Dark humor, existentialism, the absurd, the “weird”, astronomy, science-fiction, folklore . . . these are all things that I gravitate to. I am naturally curious about existence, the universe, and what exactly we are . . . our place in all of it as mere human beings. I’m asking the question “why am I here?” daily, so seeing everything in life as groundless and bizarre helps me immensely in forming images and ideas.