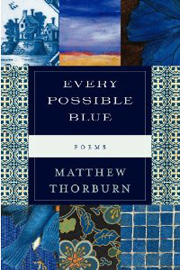 With a title like Every Possible Blue, you might expect Matthew Thorburn’s second collection to be a series of laments, but you’d be wrong. These poems are filled with blues—but they are the blues of blue skies, blue birds, and most emphatically, blue pigment.

There are anthologies of poems about paintings, but many of Thorburn’s poems are as close to being paintings as poems can be. Take “Self-Portrait with Unmentionables”:

O shimmery shower
curtain (mauve, salmon) jammed to one side—
Bonnard, you’d be happy here. Closer up, the green
neon of the mouthwash. A squiggle of cinnamon
floss pokes out of its plastic case.

The reference to Bonnard evokes a small sub-school of turn-of-the-century Impressionism—“Intimism”—which sought to bring the vibrant colors of Seurat and Gauguin indoors, where they could be arranged and put to proper domestic use. A bit of research into art history will help the reader of Every Possible Blue, since painters and bright colors pop up in poem after poem. The title is taken from the last lines of “Still Life,” a poem dedicated to Bonnard. Thorburn tells us that the painter would get guards to let him “go back / after hours to retouch / the ones hanging in the gallery . . . to get it righter / if never right,” and captures his fascination brilliantly:

. . . but light. Imperfect mirrors,
imitation mirrors. His broken
pinks and reds, green and
yellow mottle, the dash of white—
no, light—no, canvas
showing through.

Other painters make appearances, some unexpected, like the German Expressionists in “Self Portrait in Secondhand Tuxedo.” However, even those masters of dark decadence let the poet join their company:

One of Max Beckmann’s flat black numbers—
just shy of midnight, shiny at the elbows,
on loan tonight to help me fit in here

Thorburn even manages to inject color into this black and white tableau, where “snowflakes like wishes fall into the river” but “blue-stockinged gals: Greta and Inga in inky / silks, slinky satin” brighten the salon.

“Le Dejeuner sur L’Herbe,” Thorburn’s tribute to Manet’s hoary Impressionist classic, which created a scandal with its casual co-ed nudity in 1863, celebrates its enduring power to embarrass in the twenty-first century:

I blink. I blush. But no one’s
stopped to worry about poison
ivy, deer ticks, grass-stained

pants or elbows, and surprised
as I am to see them, I see no one here
seems surprised to see me.

In “Triple Self-Portrait,” the poet goes a step further and depicts the reader as a painter who he instructs:

Dream of the distant, bearded
old Masters. To join them you must be lucky

2.
and dead. Make the most of your new
Minimalist period. Yellow’s good
but let hot pink predominate.

Sharon Dolin has blurbed Every Possible Blue as “a love song to New York City,” and urban landscapes are glimpsed—but mostly from inside looking out, as Matisse would have it. What makes the book such a fun read is Thorburn’s love of wordplay of every sort; strong with clever rhymes, he is also a master mixologist of aphorisms and “poetic” conventions. “Triple Self-Portrait” ends with a bounce:

How quickly
we get to be sixty. Don’t forget
every day is one more chance to—
be careful what you wish for, everyone
says, but that doesn’t mean quit wishing.

One sign of a fine poem is that you feel compelled to read it to the next person you see, and many of Thorburn’s poems work this magic. Try to resist “Like It’s Going Out of Style”:

was a wolf content to wear wolf’s clothing.
“The trouble with trying to think
outside the box,” she said, “is first getting in.”
Old hat, Lord knows, but it fit like

a glove. They were two birds
trying to get hit with the same stone.

Every Possible Blue is like a gallery tour led by a charismatic docent-shaman. My advice is to sign up for it.