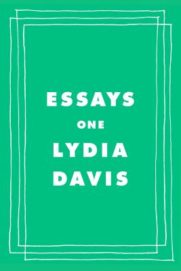 Unlike those literary artists who begin to write under the compulsion to give form to personal experiences or complex social situations, Lydia Davis seems to have been driven by nothing more than the desire to be a writer. As she confesses,

Both my parents . . . had had stories published in The New Yorker, which loomed large in our life, as some sort of icon, though an icon of exactly what I’m not sure—good writing and editing, urban wit and sophistication? By age twelve, I already felt I was bound to be a writer, and if you were going to be a writer, the choices were limited: first, either poet or prose writer; then, if prose writer, either novelist or short-story writer.

Though it would be difficult to characterize her achievement in a few words, Davis’s entire career is a testament to the value of ignoring such genre conventions.

Anyone who picks up the current volume anticipating the anecdotal humor of a Nora Ephron or the socio-cultural sweep of a Joan Didion, however, is likely to be bewildered and perhaps disappointed. For the most part, Davis is less interested in “life” than in the words and forms we use to describe it. Her stories sometimes have a recognizable shape, and her essays sometimes arrive at firm conclusions. But what readers most often find refreshing in her work, whatever the form, is the honesty and clarity she brings to it, and also the disarming awkwardness that sometimes accompanies these qualities. Her writing is methodical to a fault and devoid of lyric flair. To read her at any length is to be startled, jangled, entranced, and sometimes slightly annoyed.

This piece appears not in Essays One, however, as one might expect, but in her The Collected Stories of Lydia Davis, which appeared in 2009. On the other hand, a piece from the present collection, “The Impetus Was Delight: A Response by Analogy to the Work of Joseph Cornell,” begins as follows:

In the home of the Baker Carpet Cleaning family, the box with many compartments containing the mother’s heteroclite collection, waterfalls, plants, a plethora of fur-niture, vases, clocks, lamps, birds appearing and re¬appearing in motifs in the furniture and china as though alive, rapid heartbeats, Florida room, California room, Florida mug with flamingos . . .

The inventory continues non-stop for several pages. Though such a piece is intended to bear some relation to the assemblages of Joseph Cornell, it might be more at home in a short story collection.

Among the wide range of pieces gathered here are several conventional literary portraits—for example, an essay on Madame Bovary that first appeared as an introduction to Davis’s highly regarded translation of that seminal novel for Penguin Books. Other portraits focus on modern French authors closer to Davis’s own unorthodox writing approach, for example Michel Leiris and Michael Butor. Davis shows us another side of her art in a piece on American novelist Edward Dahlberg. She begins by locating on her bookshelf the precise location of three of Dahlberg’s books, which are sandwiched between Richard Henry Dana’s Two Years Before the Mast and Robert Creeley’s The Collected Prose. She describes both of these neighbors in some detail before taking up the works of Dahlberg himself, and she also takes the time to describe a dinner party during which a conversation took place about Dahlberg’s work:

I ask Ursule [Molinaro] what she thinks of Dahlberg. But that is after she has asked me, and the company in general, about Jane Bowles, whom she does not like, preferring Paul Bowles, as though one must choose between them. She likes Buzzati, Giorgio Manganelli, and one of our present company, Stadler, as well as Jaimy Gordon . . .

Davis goes on to site similarities between Jane Bowles’s work and Molinaro’s and brings Creeley back into the discussion before returning, three pages into the essay, to its ostensible subject, Edward Dahlberg:

I know Dahlberg interests me, though, again, I have read only a little, a long time ago, a few passages from one book or two. That was enough at the time, enough to learn something from, and to know to keep that book, and keep it handy. I always intended to read more of it, the rest of it, and more of his other books, just as I always intended, and still intend, to read the rest of other books, the whole of many other books, on my shelves, later—as though, when I retire. But retire from what?

This is hardly an orthodox way to begin an essay, but it sets us squarely within the environment from which our interest in Dahlberg or any other author is likely to develop: books on the shelf, conversation in a restaurant, reading and the insatiable desire to read more. These pages are vintage Davis, and they also expose her debt to a camp of European writers whom she greatly admires, a camp that includes Kafka and Beckett, Thomas Bernhard and Peter Handke. Davis’s prose typically lacks the intensity of these angst-ridden artists, however, and her deliberate approach to her subjects occasionally carries the ring of a ditsy script for a YouTube video.

Yet these same qualities are among the ones that endear her to many readers. They strike the tone of a high school English teacher who loves both literature and her students, and strives with selfless sincerity to introduce the one to the other. This is true especially of the essays—and there are quite a few—in which Davis proffers advice about how to write. The gist of her advice could be summarized in a few words: observe carefully; record diligently, especially when you’re not inspired; trust your own judgment; and resist the urge to bend your impressions into conventional forms. Davis is quick to admire the same qualities in other contexts. For example, in an essay that eventually works its way around to examining some passages from the Bible, she praises Thomas Jefferson for his “confidence in his own abilities and independence of thinking, independence from the norm, the accepted, a readiness to question the received, the conventional. He must have been moved by some dissatisfaction, nonacceptance—dissatisfaction with this conventional desk, with this grand staircase—and also by the pure pleasure in doing the thing himself, in poiein, ‘making.’”

Davis’s recount of her own growth as a writer suggests that in the early years she possessed little of the confidence she finds in Jefferson’s protean creative efforts. Yet she, too, loves to make things, and as this collection makes clear, she has long since figured out more than one way to make them.