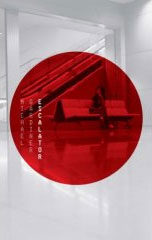 “There are more escalators in Tokyo than in any other city in the world.” So begins this debut collection of stories about Japan from Scottish theorist-cum-storyteller Michael Gardiner. Automated staircases and sidewalks eliminate the need for human movement, which Gardiner equates with human decision-making. Japan, too, is a metaphor here, a sleek and smoothly operating machine culture in which authentic human experience or contact has been rendered impossible. What desire exists is restless and sublimated, satisfied with hotel porn—its mosaic of pink cubes “always [hiding] the main action.” Some men masturbate to uniformed schoolgirls on commuter trains, while others pay for online access to a woman who has agreed to live under 24-hour web cam surveillance. She showers in her swim suit and changes clothes without revealing a single pubic hair, yet “things often fall to the floor in this room: she drops them clumsily, bending from the hips when she picks them up. She uses this same movement when looking around in her fridge.”

Every character is trapped on his or her own horrific “escalator,” either as fetish object or foreigner, failed husband, failed employee or dead soul. The best stories are explicitly surreal, even haunting. In his more realistic, slice-of-life moments, horror lurks just under the glossy surface of the “cute” or “utilitarian.” Take, for instance, the device expectant mothers can apply to their abdomens. It recites conversational English phrases so that a fetus can cram for the competitive world of international business while still inside the womb.

Just as Gardiner’s world is one where people feel trapped in transit, it is also a world where translation malfunctions. An Iranian immigrant is relegated to reciting simple phrases to children in an ESL classroom, reduced to a machine, as his fluency in Japanese goes unrecognized and unaccepted. In another nightmare scenario, a now-homeless IT professional keeps track of time with “a watch-face he’d found in the gutter,” which:

kept perfect time, going forward seventeen hours for every twelve of world-time. On the back wall of the shack there was a doubled-up sheet of cardboard shored up against cold, and calculations covered every square centimeter. All involved the numbers twelve and seventeen.

The text itself follows a kind of distortion, its cold and distant san serif script conveying a stilted prose style resembling computerized translation. “Shinkansen—which are still known, to those who fill the world with English words while refusing words entry into English, as ‘bullet trains’—come in three types,” begins one story. Gardiner also cultivates a quality of cliché, of blank description, of deus ex machina narratives: in the final paragraph of a story, the protagonist walks down a street and stumbles “against a male student holding a book on archaeology, a subject his Prestigious University counsellor had advised him to give up for the Law.”

Gardiner wants his readers to be jarred by, alienated from, the very language he uses. This is an interesting idea in the abstract but can make for painful reading, as Gardiner often lacks the skill to employ it effectively, with restraint.

Yet, there are moments, also, where Gardiner the theorist—he is the author of several critical works on Scottish literature—hatches a beautiful idea in the mouth of one of his cardboard characters. A meat pie inspires one such turn:

(It) tasted authentic, as authentic as the British souvenirs in the terminal shops. In airports, things are always authentic. Sometimes you get exhausted by the authentic, and crave the inauthentic again.

This collection would have benefited from more such moments, moments of real connection between text and reader—moments of lyricism, even. One character wonders “when he had allowed the slip from active to passive mood and had stopped thinking out how to spend each day. Once he had spent days; now his days took place.” One hopes that, with time, Gardiner develops a better balance in his fiction, a balance between stylized technique and allowing the words themselves to speak.