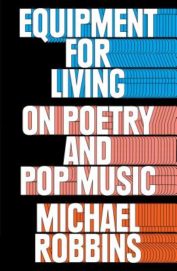 Michael Robbins might be the Baudelaire of 21st-century America. Like the Parisian polymath flâneur, he rambles wide-eyed and open-eared across intersections of seemingly disparate neighborhoods, mixing them together: high art with low life, arcane literary scholarship with drugs and rock 'n' roll. What for Baudelaire were the frissons of modern art, Robbins finds in pop music, to which he responds with bracing enthusiasm—as one might expect from a music writer schooled in the journalism of Pauline Kael, Greil Marcus, et al. His erudite post-grad chops (he holds a Ph.D. from the University of Chicago) combine with an attentive, ecstatic, hermeneutic relish for the sound-meaning of both poems and song lyrics. The lines speak to him across distant reaches of genres, levels of discourse, and historical eras—and by interpreting what he hears, he humanizes and draws them close with a few deft phrases (about that canonical and much-anthologized 16th-century lyric "Westron Wynde," for example, he writes simply: "I love the poem because it is a perfect condensation of loneliness—a kind of pop song").

This carefully-honed multidisciplinary approach opens a surprising chapter in contemporary poetics, for Robbins is a kind of neo-classicist with respect to poetic form; he would be a New Critic, if he weren't a newer critic. He thinks of "form" as the essential glue bonding lyrics to poetry, and more importantly, writers to readers, poets to crowds. One of the best essays in the volume is a careful analysis, and defense, of the values of rhyme (a formal quality of poetry seemingly—but not really—out-of-fashion for decades). In this vein, he seems part of a generational wave of neo-supra-formalist poets, including A.E. Stallings, Ange Mlinko, and that eminence grise Frederick Seidel (to whom Robbins devotes a very subtle if slightly over-cooked philosophical essay). Thus, he breaks with generations of parochial postmodern exceptionalism focused on theory, conceptual poetry, and other such zoomorphs. By way of erudition and sheer sonic enthusiasm, Robbins partially restores a link with folk music, popular poetry, Renaissance poetics, and various cosmopolitan antiquities beyond.

Equipment for Living's nostalgic affinity for Baudelaire, and mid-20th-century culture generally, also reflects a somewhat less positive stance. There is a repeated characterization of the telos of poetry as "consolation": Philosophical consolation, in poetry's calibrated balance of existential desolation with intelligence (the liberty of insight); emotional consolation, in the powerful but ephemeral pathos of "the music of what happens"; and social consolation, in the sharing of communal works of heavy-metal or folk-rock transcendence.

This emphasis on consolation (rather than construction) seems grounded in a worldview closer to desolate postwar Europe than to any American-style Emersonian optimism. The bleak naturalism of Stevens, or the anti-naturalism of Seidel, is wedded to a plangent "Occupy-Era" sensibility of utopian frustration. In his piece on James Wright, Robbins declares: "Poems are a meager response to a scurvy and disastrous world in which hardly anyone reads them." Fortunately, the vitality of poetry itself often belies the poet's own bleak temperament (see Robbins' own two volumes of verse). And there is always the possibility that the "poetry of reality"—the "music of what happens"—might be the intelligibility of the universe, which poetry per se has only begun to explore.