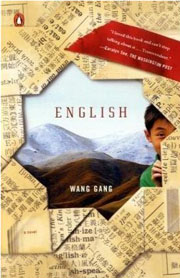 English is a coming-of-age novel. As such, it hits many of the notes familiar to this most English of literary forms (its precursor, thebildungsroman, has more stringently German requirements): a boy grows up, learns about love, separates from his parents, takes on a new father figure, and eventually reaches manhood through admitting to and atoning for his transgressions. And yet, in its setting, the novel is unwaveringly Chinese, not only in taking place during the Cultural Revolution (1966 – 1976), but in being situated in the city of Ürümchi—the capital of Xinjiang Province, in China’s far northwest—a land that has often seemed almost as distant and distanced from Beijing and Shanghai as China in the 1960s would have felt from the capitalist West.

Wang Gang’s mixture of these elements has produced a novel whose most interesting tensions are not between the protagonist, Love Liu, and either his English teacher Second Prize Wang or his classmate Sunrise Huang, but rather between the symbolic worlds represented by, and through, English and Chinese as languages. In Chinese, for instance, a principal tries to root out the vandal who slandered a school wall by scrawling “Down with Chairman Mao” on it, but cannot repeat the offending phrase; instead, he demands of the students: “Write ‘Down with’ on the front and ‘Chairman Mao’ on the back. You must not write all the words on the same side of the paper. Anyone who does is a counterrevolutionary.” On the other hand, English, as depicted by the teacher, is a language of bourgeois virility but also suspicious morality. Love Liu describes his first encounter with his English teacher: “Suddenly I heard footsteps and knew that Second Prize Wang was coming back to use the bathroom . . . I couldn’t help peering over. I cringed in shock—it was enormous. I’d never seen such a big one.”

The significance of the different languages and how they interact in the novel presents particular challenges for the translators, and overall their English—and their English—is as fluid and conversational as Wang Gang’s Chinese. At times, however, more creativity would have sharpened the reading: given the centrality of the dictionary as a plot device, a more imaginative rendering of the phonetic transliteration of “English” in the title—something like “Eng´·lish,” for instance—would have drawn this out. Likewise, the name of the English teacher is a pun that means both “second prize” and “Asian Military,” a common name for Chinese people born soon after the Communist Revolution; some kind of accommodation of the double meaning would no doubt be of interest to readers. A close comparison of the English and the Chinese reveals that many cuts were made for the sake of an Anglophone readership, a common but needless misstep on the part of publishers, who seem to have quite low expectations of American readers.

For a novel as invested in the richness of language as English, however, Wang Gang’s writing tends to shy away from lyricism and indulgent delight in language for its own sake. Its story-telling and its narrative are both straightforward and clear, as it spends more of its energy on plotlines and, especially, external depictions of characters’ interior development. This allows the drama of the story to open up naturally, unpretentiously—a significant trait given the narrator’s attempts to model himself after the English teacher gentleman—and yet also to crescendo into a tour de force of a conclusion. In that, too, by the end the novel’s childlike guilelessness has come of age and developed its own mature, sophisticated style.