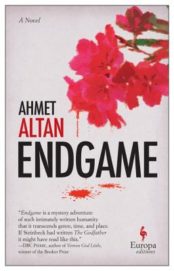 Turkish writer Ahmet Altan has been in prison for over a year, accused in President Erdogan’s crackdown on the media of “sending subliminal messages” to encourage the planners of last year’s failed coup. Endgame, his first novel available in English, is a bold metaphysical thriller, critical not only of ruthless politicians, but also, arguably, of God himself.

The plot is a classic murder mystery in the style of Chandler or Hammett, except that instead of a private detective, the protagonist is an unnamed novelist who has gone to a small town to write “a book about murder. And so what if I turned out to be the killer?” This is an unusual twist—not until the end do we discover whom he has killed and why—but for the rest, it is the familiar story of an outsider whose lust leads him into a sinister web.

First he becomes involved with Zuhal, the girlfriend of Mustafa, the megalomaniac mayor (with whom she is still in love). In the seemingly idyllic seaside town there is an ancient church, which some believe is the resting place of Jesus, and which everyone believes is the site of hidden treasure. The narrator doubts this, but as Mustafa tells him, “This church is what makes this town. Even if there isn’t a treasure, well, there is as long as we believe in it.” He becomes friends with Mustafa, who doesn’t know he is sleeping Zuhal, and when the mayor asks him to write a speech justifying his decision to close the church to everyone, the narrator agrees but understands that he will be seen as his accomplice. Nevertheless, Mustafa’s rivals court him too: he is offered protection by Muhacir, Raci Bey’s tame gangster, and is seduced by Raci’s wife. He is now sleeping with the women of the two most powerful men in town. When the inevitable conflict starts, the narrator understands that he is in danger and resolves to leave, but the opportunity to have sex once more with one of his lovers changes his mind.

This summary fails to evoke the metaphysical and indeed theological flavor of the novel: imagine The Trial, but with less subtlety. In many of the chapters, the novelist-narrator ponders God’s nature and the problem of theodicy: “And why worship God if he granted me the power to kill? . . . You created us so you could taste emotions that you would otherwise never know.” The narrator never doubts God’s existence but many Muslims would consider his questions blasphemous. “Is the sinner more sinful than the creator of the sin?” he asks. “Is God a sinner? . . . And if God didn’t create sin, is there something in this universe that he doesn’t know? Is there a limit to his power?”

Such reflections may not be wholly original, but they become more engaging as the novel takes a metafictional turn worthy of Paul Auster. The narrator compares his novel with the book being written by the Creator, and increasingly the two are confounded. For example: “Who can condemn me for murder in a novel that I have written?” There are further narrative complications too: Zuhal helps him write the novel, based on their affair. When she visits a fortune-teller, who shocks her by knowing all about her life, she wonders whether their fates are sealed. The narrator answers:

God . . . rewrites destiny every day . . . sometimes he changes the ending he had in mind at the start . . . imagine yourself as a character in a book . . . characters in novels still have the right to speak up for themselves . . . after a point the characters determine what the writer will put down on the page . . .

Such musings may irritate readers who prefer their thrillers neat, and the novel has other weaknesses. Whole chapters are devoted to online chats between Zuhal and the narrator, which we are told are erotic, but which often seem trite and solipsistic, as in this example: “i constantly miss the feeling i have when i’m with you . . . it’s the feeling of someone pulling you out of the bottom of a well . . . the feeling of emerging from yourself and setting off on a journey . . .” None of the characters really comes alive, which may not be a great fault in a potboiler detective story, but surely is in such an ambitious novel. In the end, its greatest shortcoming may be that the philosophical underpinning is just not innovative enough. Still, Endgame is an entertaining book, seems ably translated by Alexander Dawe, and affords English-language readers the chance to read the work of a brave writer who has been imprisoned for his writings.