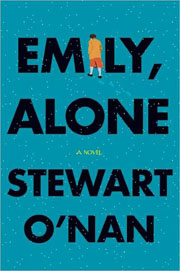 Despite its subject matter—an eighty-year-old woman adjusting to life after the death of her husband—Stewart O’Nan’s Emily, Alone is not a somber book. The title is not just about what Emily has lost but what she retains: her independence and ability to take care of herself. Living alone in her own home is a point of pride, and Emily is a capable, nonsentimental woman with a clear-eyed view of her own limitations. Her decision to give up driving, for instance, is simply practical: “After a run-in with a fire hydrant, followed quickly by another with a Duquesne Light truck, she admitted—bitterly, since it went against her innate thriftiness—that maybe taking taxis was the better part of valor.”

The book takes place over only ten months, but the past keeps popping into the present. Driving through a tricky intersection dredges up memories of car accidents, and discussing Thanksgiving at the Club recalls a birthday party there forty-five years ago. “She could not stop these visitations, even if she wanted to. They plagued her like migraines.”

Parallel to the glimpses into Emily’s past are the peeks into the history of her city. After the Nabisco factory is turned into condos, we feel (and smell) the loss: “They made Ritz crackers, and the warm, buttery scent surrounded the place like a cloud. . . . Like any Pittsburgher, Emily had been strangely proprietary about the place, and the crackers, as if she’d made them herself, and was sorry it was gone.”

Several dramatic events occur, such as Emily overcoming her fear of driving so she can take care of her sister-in-law Arlene in the hospital, or apologizing to her dead parents for being ungrateful and snobbish, ashamed of her humble roots. But the big plot points are not as important as the minute and quotidian details of her life—what she eats (melba toast and black tea most mornings, splurging on a two-for-one all-you-can-eat buffet every Tuesday at the Eat ‘n’ Park), how she spends her days (“rationed correctly, the [New York Times crossword] puzzle would last her all week”), and what dominates her conversation (whether her children will visit for the holidays). The precise and realistic detail immerses the reader completely in Emily’s world.

The novel’s chapters are short and episodic, and the shortest ones (less than a page) are almost like prose poems. In “Forgetfulness,” Emily accidentally strands her dog Rufus outside and sees him “peering forlornly through the French doors.” In “Kleenex,” Emily redistributes the tissue boxes around the house, in preparation for a visit from her daughter’s family. So much is unsaid yet clear—Emily’s anxiety about the visit, her reflection on her husband’s absence, the way the emptiness of her days is echoed by the emptiness of the boxes, and her strategy to stave off fear of chaos in the future by keeping the present in order. O’Nan pulls off these deep themes while also making the book quite funny. Rufus “would eat anything—lettuce, tennis balls, wallets. Once he’d devoured an entire belt of Henry’s leaving just the buckle on the floor.”

Despite (or because of) its focus on mortality, Emily, Alone is reassuring. If I can be as spry and self-aware as Emily in forty years, as witty and capable of change, as unafraid and matter-of-fact about death, I will almost look forward to getting old.