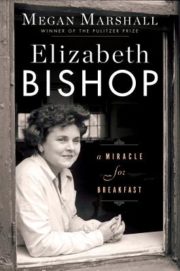 The subtitle for Megan Marshall’s Elizabeth Bishop: A Miracle for Breakfast could have been “A Creature Divided,” from Bishop’s final published poem, “Sonnet.” Elizabeth Bishop is known as a poet of small but precise output, who pairs remarkable personal reflection with emotional restraint. While her long-time friend Robert Lowell remarked on “the seemingly dispassionate coolness” of her poems, she thought of poetry as “the most natural way of saying what I feel.” And this book reveals the many reasons this reputation is well earned, but it does more than that.

Marshall’s research, including newly accessible letters Bishop wrote to her therapist, and her smooth, concise storytelling, make the book both an elegant, empathetic biography and an insightful analysis of an artist who sought “a way of thinking with one’s feelings.” This is the first biography of Bishop in twenty-five years, a period when the public’s attitude toward LGBT issues has undergone a sea-change, casting new light on this poet’s life. “Sonnet,” as Marshall discusses it, reflects both feeling “caught” as well as being “freed,” which is just one of the dualities in Bishop’s life.

Bishop’s divisions are clearly captured in two childhood photos, reprinted in the book. In one, the six-month-old toddler has “toppled” and appears “immobilized in a nest of blankets” and yet she “stares stubbornly in frustration at the camera.” In the other, the child is “seated ramrod straight, gazing imperiously beyond the frame of the photograph.” Using the poet’s own words, Marshall concludes that already Bishop is “being brave,” putting on a brave face for the world even as she struggled inwardly. This was, Bishop confided in a letter to her therapist many years later, “my major theme.”

Bishop’s upbringing was one dimension of her experience about which she was circumspect. Her therapist, Ruth Foster, told Bishop that she was lucky to have survived her childhood, and Marshall evokes the difficulties—and capriciousness—of those early years with haunting images and incidents. By the time Bishop was eight, her father died, her mother was sent to a sanitarium, and the girl was beginning to be shuffled from relative to relative. As Marshall puts it, “growing up too fast as the virtual orphan she was now, meant becoming a self divided from the world— ’inside looking out’―and suffering even more divisions.” The need for secrets was established early on, reinforcing her natural shyness. For example, Marshall describes the young Elizabeth bearing a care package through the village in Nova Scotia where her grandparents took her in, but hiding the address; the public gesture of concern was marked by the private shame of having a mother in a mental institution.

This same dynamic operated in her life-long struggle with alcoholism. Her letters to editors, friends, and fellow poets were filled with so many apologies that even her biographer admits, “I sometimes tired of reading her apologies and excuses too. And then I felt sad about the futility of her always broken promises—to write more, drink less.”

Being a lesbian also marked her for restraint, despite living into the era of Gay Pride. When Bishop was named Library of Congress Poetry Consultant, a position now called Poet Laureate, it was during the 1950s, when not only was there a Red Scare in full swing, but the purge included all “perverts” as well, i.e. homosexuals. It was not safe to be who she was, to celebrate and reveal herself in society or in art.

The saga of her loves and how they gave rise to her poetry is an important part of the book. She was rooted in relationships, not locations, making family not through blood or marriage but through choices and commitment. Bishop’s book titles employ metaphors of travel and geography, in part because her upbringing and ways of living led her not to feel at home in the world.

Bishop’s most famous poem, “One Art,” ironically declared that “the art of losing’s not too hard to master,” even as the catalog of losses in her life accumulated. Her childhood losses would be enough to frame a life, but after college, a man whose marriage proposal Bishop declined killed himself and blamed her in a postcard to her. Suicide, or willful accident, touched her again when the poet Randall Jarrell died, and again even more closely when her Brazilian lover Lota de Macedo Soares died after a painful spiral into mental illness.

Experiencing her mother’s illness as a small child, Bishop was haunted by the threat of madness, which marks her friendship with Robert Lowell. Lowell is also the father of Confessionalism, a poetic movement Bishop called “The School of Anguish.” She is quoted in TIME as saying that “the tendency is to overdo the morbidity. You just wish they’d keep some of these things to themselves.” Marshall deftly analyzes how Lowell’s more personal work, particularly his book Life Studies, influenced Bishop, and how her own work in turn influenced Lowell. In the end, though, Lowell took self-revelation too far in The Dolphin, a series of poems that use letters from his ex-wives (as well as one of Bishop’s). The letters the two writers exchange reveal just how powerful a mind and will she possessed, and how prescient her warnings were.

The dilemma Lowell faced in poetry only morphed into the same problem of revelation that writers of memoir and other creative nonfiction face today. Not only was Lowell using material he did not have permission to use, he changed others’ words to suit his purpose and form. In the end Bishop came down on the side of the irreversible damage Lowell’s poems would cause his ex-wives. “It’s cruel,” she concluded, and “art just isn’t worth that much.”

Marshall’s only false note is deciding to frame Bishop’s biography with alternating chapters of her own experience taking a class with her. To fill out that story, Marshall develops her own poetic journey; it fits, but as with many frame narratives, the main story is far more compelling and revealing. Despite this small misstep, Elizabeth Bishop: A Miracle for Breakfast is an elegant biography with incisive analysis of the social context and resulting poetry of one of America’s great poets. Her life and art ran counter to the trends of her time, and so she continues to serve as a model for those seeking ways of expressing difficult or even shameful truths.