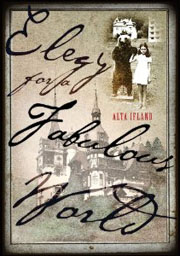 Is Alta Ifland a real person, and if so, does she know real people? Her recent collection of short stories, Elegy for a Fabulous World, doesn’t provide any easy answers. Half memoir, half fantasy, the collection sprawls across two continents and a lifetime, tracing a cast of characters who are barely alive and objects that are barely inanimate. There’s milk that transforms into Miruku, a Japanese man named for the substance; near-sentient office buildings in Los Angeles; and the mystifying Adelaide Bauer, who launches into orbit upon breaking her decades-long silence. Instead of a family tree, Ifland has constructed a ghoulish arboretum of nowhere men and women—people who languish in an incomprehensible void, somewhere between Ukraine and the United States.

Of course, conventional biography is hardly one of her interests; as Ifland tells us on her website, she was “born in a lapse of time, my hand clinging to a dandelion, my feet gripping a vine leaf, my nose on my back, an eye on my ankle.” Yet for every story about being born in a chronological black hole, there is one about a tumultuous cross-cultural marriage (“The Wedding”); for every tale about a boy whose esophagus buds a sapling (“Harry and the Tree in His Lung”), there is another about an ill-fated love triangle between academics (“The Girl, the Professor, and the Wife”). It’s hard to believe, then, that Ifland is not trying to communicate some sort of meaningful experience, one that happened to an actual person in an actual time and space.

The catch is that these brief transmissions of human emotion occur only when you least expect them—in the most unreal stories. Ifland’s American foster parents and Eastern European aunts and uncles are real, but they don’t cry like it, talk like it, or live like it. Rather, they gurgle cryptically on the page, rarely moving beyond the farcical and never conveying the kind of emotional knock-out punch that such trope figures of transcultural memoirs are intended to deliver. In the end, readers turn to figures such as Harry, whose bizarre tree-in-the-lung-predicament generates a rare pathos that eludes Ifland’s more traditional, biographical prose.

Joyriding through Ifland’s world of nonsensical ephemera is no simple task, but it might be worth it just to get in on the joke. In “Random Bus,” Ifland is at her most perplexing, but she is also at her most irreverent. Less a story than a rumor, the narrative unfurls as a furtive exchange between no one and anyone—two nameless heroes who swap the great question of the memoir (do you remember?) for that of the elegy (do you know?). The premise is simple, riffing off the question “have you heard of the random bus?”—a delightfully erratic vehicle that wafts its way through an anonymous urban landscape. Chances are you haven’t.

Moments like these are not only surprisingly emotive; they are tongue-in-cheek responses to the collection’s starker moments as well. “My Life as an Orphan,” for instance, recounts the brutal experience of blending into the Styrofoam melting pot of American consumer culture. This requires much more than just a transfusion of hearts and minds; it mandates a whole cosmetic as well—a cultural facelift that remodels the “scowling mug” of the East European orphan into the neurotic smile of the nuclear family member and the fast food employee.

Such ostensibly familiar stories are legible only in conjunction with their off-the-wall counterparts. By the collection’s end, we no longer care who Alta Ifland is, but we do care about the questions she raises. After all, how can anyone remap a foreign face if they can’t map their own bus routes?