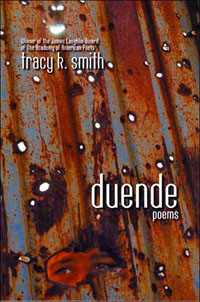 Something haunts Tracy K. Smith’s second book of poems—perhaps the invisible yet palpable veil between life and death. YetDuende doesn’t present as mystical, or even morbid, although it’s often melancholy. Ordinary and varied themes of relationships, the weathers that swell and recede inside and outside of bodies, historical and newsworthy episodes, and music and film references all populate the book. As does the duende itself, the Spanish term for a restless daemon. Its Portuguese cousin, saudade, “a vague and constant desire for something that does not and probably cannot exist” also appears, as do poem titles such as “Astral” and “The Nobodies,” entities that hover above and beyond physicality. These force fields, feelings, and diffuse states of being are the tonal characters, like charged electricity, that inhabit the spaces among narration, scene, and line.

So the duende, in all of its in- and dis- carnations, coheres the volume as the strong and intriguing organizational thread. On the page, however, the poems remain grounded in vibrant images, persona voices (a long-dead species of tiny human; kidnapped teens in Uganda; poetry itself), and specific places (Brazil in particular), even as they contemplate ethereal meaning. Here is the beginning of “El Mar,” offered in Lucille Clifton-like snapshot-musings:

There was a sea in my marriage.
And air. I sat in the middle

In a tiny house afloat
On night-colored waves.

One of Smith’s strengths is the quiet slide into surprising metaphor, as in the beginning of the sonnet “Diego,”—

Winter is a boa constrictor
Contemplating a goat. Nothing moves,
Save for the river, making its way
Steadily into ice. A state of consternation.

—or the poignant, long-lined couplets of “Letter to a Photojournalist Going-In”:

You go by bus or truck, days at a time, just taking it
When they throw you in a room or kick at your gut,

Taking it when a strong fist hammers person after person
A little deeper into the ground. Your camera blinks:

In “History” the most daring and stylistically different piece of the collection, the poem’s own voice, in separate and unique sections, weaves a creation story of heritage, language, human suffering and success—of how words make the work of the world manifest, and how restlessness is at the root of that manifestation… ah, duende again. This ambitious poem about naming and the power inherent in that articulation feels both volatile and intricately wrought.

More full of innuendo and intertwined voices than Smith’s debut book, The Body’s Question, Duendepays homage to and beautifully expands upon Federico Garcia Lorca’s idea that a felt perception of death-in-life underscores all creativity. In fact, reading this volume—which is epic in impulse and dramatic in gesture—is like watching a production of a Lorca play: while you may be the reader/viewer, privy to a world of both sensuality and shadow, there’s the uncanny feeling that someone, something, may be reading/watching you.