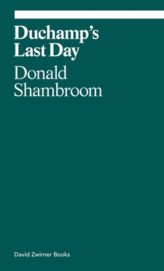 By sheer coincidence I started reading Duchamp’s Last Day shortly after reading Japanese Death Poems, an anthology that contains work “Written by Zen Monks and Haiku Poets on the Verge of Death,” as the subtitle says. One specific passage from the anthology’s introduction lingered in my head while reading Donald Shambroom’s short account of the final day that Marcel Duchamp spent alive on earth. It reads:

However strange it may seem, many poets chose to end their lives with a satirical poem, and some even mock this mockery itself. One kyōka poet wrote down, before dying, the well-known death poem of another poet, prefacing it with the words “I borrowed this poem from someone,” and adding after it, “This is the last act of plagiarism I shall commit in this world.”

Duchamp was hardly a plagiarist—he was a determined originalist, if an idiosyncratic one—but Duchamp’s Last Day highlights how, up until his very end, the artist placed substantial emphasis on gaiety and irreverence. “I am extremely playful . . . and I believe it’s the only form of fun possible in a world which isn’t always much fun” is, as Shambroom relays, how Duchamp put it in 1966, two years before his death, and this jesterly predilection extended to his final evening. After Duchamp dined with his close friend Man Ray and a few other guests, Man Ray slipped and fell outside while walking to his car. After the shock wore off, the episode struck all in attendance as inexplicably funny:

“You’d thought I’d dropped dead,” [Man Ray] said in English. The phrase struck a nerve, and the hilarity returned. On the ride home, the friends improvised a melody with variations on the theme. “Drop dead! Drop dead!”

A scant few hours later Duchamp was indeed deceased and, at the scene almost immediately, Man Ray was photographing him on his deathbed, carefully orchestrating his beloved friend’s death mask for posterity.

Although a substantial amount of Duchamp’s Last Day is given to discussing this posthumous “collaboration” between Duchamp and Man Ray, along with the somewhat nonsensical consideration of whether the canonical artist’s last work had been his own death—“Had the master chess player done it again? Could Duchamp’s death have been a time-bound readymade?”— the most engaging parts of Shambroom’s volume instead contextualize Duchamp’s life and art within 21st-century culture, where words like “hybridity” and “mixed genre” are so ubiquitous as to be meaningless. Yet that wasn’t always the case, and it was Marcel Duchamp who played a significant role in blurring the distinctions. Disregarding or ignoring established painterly figuration (and then, in 1918, quitting painting altogether), inventing the concept of the “readymade” artwork in 1915 by signing a snow shovel and declaring it a Duchamp original (entitled In Advance of the Broken Arm), and eventually creating the now iconic readymade Fountain in 1917, a “sculpture” that to the untrained eye might appear to be an entirely pedestrian urinal with the name R. Mutt graffitied on its side—all of these schisms of Duchamp’s put forth the decree that, in Shambroom’s words, “anything can be art that is seen and treated as art.”

Certainly that was true before Duchamp’s time as well, and with every new artistic innovation, from chiaroscuro to mixed-material usage, comes denouncing and deploring. In the early 20th Century, however, Duchamp took it one step further—and that step was controversial. The readymades in particular are still able to draw artistic ire. During his lifetime Duchamp said various things about them, from calling the concept of the readymade his “most important single idea” to, conversely, simply stating that the objects were “a very personal experiment that I had never intended to show to the public.” Some think that Duchamp placed idea before artifact, concept before beauty, and that this calculation diluted all artisan-based skill and craft. For the members of this school of thought, both the contemporary viewer and the contemporary artist are still paying the price for Duchamp’s celebrated innovations/denigrations.

Death, of course, is everything and nothing, and on a lesser scale Duchamp’s work also embodies this duality. “Reality is flowerlike: / cold clouds sinking through / the dusk” reads a haiku from Japanese Death Poems. Such is the allure and annoyance. Duchamp, I think, would have basked in the dilemma.