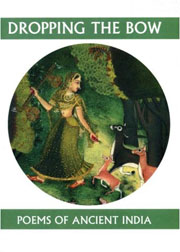 While we now have substantial volumes of translations of Chinese and Japanese poetry, the poetry of India remains less known. Yet India’s poetic tradition is as refined and concise as anything wrought by Sappho in ancient Greece, Catullus in Rome, Tu Fu in China, or Basho in Japan.

Schelling has also included translations from Sanskrit poems—some written as early as the 4th century, some as late as the 14th century—and these too are almost entirely devoted to love. Years in the making, these translations clearly contain rasa (“spirit juice”), the key element of Sanskrit poetry; they are as tender and beautiful in their lucid simplicity as anything you might find in The Greek Anthology or the T’ang tradition from China.

Due to the disinclination of past Indian scholars to record biographical information, dating the poems and the poets is difficult, with estimates available only by an approximate century or so—although this practice seems to have put more emphasis on the poems as poems, rather than on who wrote them, when, or why. Shining above the rest are those poems written by Vidya, a woman who “may have lived as early as the 7th century.” In one poem she describes herself as “dark as the blue lotus petal,” and Schelling notes that she “wrote freely and convincingly of love outside the conventions of marriage.” In another she describes how a “hilltribe girl,” after lovemaking, still clinging to her exhausted lover, uses her bare foot to jostle a shell necklace hanging from a vine on a fence, “rattling it / through the night, /scaring the jackals off.” And here she captures perfectly the emotional abandonment to love:

What wealth,
that you can chatter
about a night spent
with your lover—
the teasings,
smiles, whispered words—
even his special smell.
Because, O my friends I swear—
from the moment
my lover’s hand touched
my skirt, I remember
nothing at all.

This is Schelling’s third volume of translations of poetry from India, his others being The Cane Groves of Narmada River (City Lights, 1998) and Erotic Love Poems from India (Shambhala, 2004). While others have also translated Indian poetry, few have captured the condensed feel of the earth and the human spirit as well as Schelling. Maybe that’s because he not only translated these poems, he lived them: he first traveled to India as a young man in 1973 with only a little money, a pocket knife, and a spare shirt; he has “crouched over the coals of a small dung fire in the curb.” The pleasure of Dropping the Bowsuggests that such immersion is what it takes to craft the finest translations from another part of the world and a long-gone era in history.