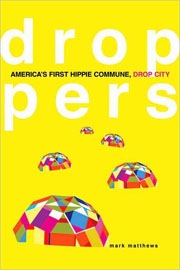 Drop City was an artist’s commune outside Trinidad, Colorado, founded by a group of friends from the University of Kansas who lived in domes they built from found, donated, and cheaply purchased car tops and other materials. This much is clear. Also clear is why the inhabitants of Drop City referred to themselves as “droppers.” Eugene Victor Debs Bernofsky, the group’s early leader, and his cohort Clark Richert used to drop painted pebbles from rooftops in Lawrence, Kansas, and took their name from this activity.

Somewhat more difficult to describe is the utopian vision behind Drop City. Bernofsky points to frustration with the Vietnam War and a desire to “let humanity evolve through a process of satisfying wholesome creative drives.” Bernofsky also said it was “based on the ideals of brotherly love and the rejection of capitalistic materialism.” While vague enough to be accurate, these definitions are awfully clinical for what Drop City was like for those who were there. Bernofsky’s eventual rival for unofficial leadership, Peter Douthit, did a better job of evoking the place when he said “it fell out a window in Kansas . . . with a mattress and a balloon full of water and landed in a goat pasture.” Another stalwart attempt comes from William Hedgepeth: “Drop City is a half-forbidding netherworld where idealistic troglodytes lurk and live in fields of giant candy-colored toadstools.”

If at this point you’re not sure exactly what Drop City was, neither it seems were its members. The lack of a specific definition was both cause and effect of the fact that “from the inception of Drop City, the core of founding droppers had decided they would make no rules, nor devise any standards by which to judge anyone who wished to join the community.” Of course, that’s part of the point. Drop City couldn’t have been whatever it was if it had come with a focused mission. But the lack of structure to guide the sincere idealism of the movement led to its eventual downfall, as it arguably did to the larger hippie movements of the ‘60s.

The seduction of rebelling against the strictures of society by self-indulgence eventually came to dominate the intention of rebelling against the strictures of society by practicing an intentionally idealistic lifestyleat Drop City. In the first two relatively successful years, drug use centered around light marijuana use in concord with the artistic lifestyle. Sex in these years was conservative too, taking place almost exclusively in monogamous relationships. This isn’t the “first hippie commune” you might imagine. But the casual sex and heavy drug use did come in 1967 when Douthit, whose influence was on the ascent, announced Drop City’s Joy Festival and brought in hundreds of people from around the country who were not invested in the commune, except insofar as it was briefly the place to be.

Bernofsky said, “At that time no essence or soul had been built into the community that could withstand anything like the Joy Festival.” Seeing human nature once again spoil human idealism, Bernofsky left Drop City immediately after the festival. Other early members left soon after, and the commune began its slow fizzling out.

Mark Matthews captures this whole saga in his book, Droppers. Following up on an article Matthews wrote about Bernofsky for Audubon magazine and a review he read of T. C. Boyle’s novel Drop City(which Bernofsky claims was based on the commune), Matthews wanted to write a biography of Bernofsky. But this project was stalled when Bernofsky’s wife refused to cooperate, claiming to be too private for that sort of thing. “As an alternative,” Matthews writes, “I offered to amend the parameters of the story—back to Bernofsky’s original suggestion that I write a social history about Drop City.” Reading along, it’s impossible not to suspect Bernofsky and his wife of conspiring to get Matthews to write the book they wanted. The extent to which Matthews is forced to rely on Bernofsky as a source gives the Drop City founder a strong voice in shaping the story. And considering how often in the book Bernofsky tricks those around him to get what he wants, it’s likely this book is just what Bernofsky had in mind. The idea that his wife is “too private” to be quoted in a book is further challenged by the fact she appears on screen in a documentary, Drop City, discussing the commune. (The film hasn’t been released yet, but a trailer can be found online.)

But Matthews is a willing mark, happy to play along with Bernofsky’s games for the sake of a good story. In the book Matthews also does what he didn’t do in his Audubon article and fact-checks everything Bernofsky tells him, so Matthews ultimately has a grip on his slippery subject, providing an historical and social context for Drop City that opens the book up from Bernofsky’s retelling. The interspersions of excerpts from Time magazine issues from the era (e.g., “To keep the state moving ahead and at the same time in the black, Reagan proposed a budget of $5 billion and called for $946 million in increased taxes”) are particularly helpful for understanding the background for Drop City. It’s an informative read, simultaneously inspiring and realistic—and one any young idealist should be sure to note.